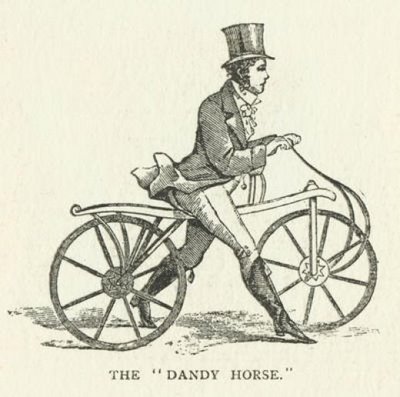 Font of all this talk of dandyism is this article that Mark sent me about the recent Dandies and Quaintrelles Ride in Washington DC. The exact historical era being hearkened to is a little muddled, but basically a bunch of hipsters dressed up in tweed and Victorian garb and rode their bikes through DC.  Where I come from, dandyism reached its apogee in the late eighteenth and early nineteenth centuries, when the stirrings of industry allowed certain ascendant members of the middle class to adopt the lifestyles of aristocrats. I cannot think of a more apt parallel to our age, when the children of real estate developers aspire to careers in slam poetry and Bennington exists. Then as now, one signified one’s membership in this bold movement toward freedom and aesthetics by buying things. As Dan Zak, the let’s-say ambitious prose stylist behind the Washington Post article, writes, “This costumed lark may be a thread in a broader trend—a cyclical return to old-fashioned cocktails and chandelier lighting and waistcoats—that is nurturing a new brand of masculinity (rugged but elegant and old-world American) from the slick ashes of the European metrosexual.” Thank god I finally have an explanation for all the waistcoats and chandeliers I’ve been seeing everywhere. Also, “slick ashes” are better known as rocks. Perhaps more telling is the assessment of DC fashion writer/Zak’s probable girlfriend Rachel Cothran: “The whole idea of a dandy goes beyond fashion, and it’s about being smart and thoughtful and intellectual and well-read, and I think that totally appeals to men in Washington,” Cothran says. Ah, yes—smart and thoughtful, not to mention intellectual, plus well-read.

Nothing says “well-read” like clothes, but for those of us who can’t afford to trade in our striped sweaters and skinny jeans for tweed, I guess there’s always books. Alert reader/refutation of qaintrellism Carolyn Jacobson sends us this review of Going Rogue, which is perhaps the funniest thing I’ve read all week. What I could not capture in 1100 words about replicants and snakes, the mysterious “va” nails with the phrase, “the author-function Sarah Palin.” It’s a quick read, and contains my new favorite Palin fact. And I quote: “Steve Schmidt apparently thought Palin’s brain wasn’t getting enough carbohydrates to function properly, which is why we’ve been hearing Palin complain about being told what to eat. Palin relates on page 285: He then launched into a discussion of nutrition physiology, holding forth on the importance of carbohydrates to cognitive connections and blah-blah-blah.” First of all, during the 2008 election, a professional campaign advisor at the highest level of his field began to suspect that Sarah Palin’s brain was not getting enough nutrients. Second of all, in defending the functioning of her brain, Sarah Palin draws a connection between cognitive connections and blah-blah-blah. On the plus side, she goes to church a lot and she’s pretty.

If you’re smart enough to see the way Barack Obama is deeply connected to blah-blah-blah, what with his spending and stuff, and the way blah-blah-blah is in fact part of socialism, then you probably already heard Glenn Beck say that the House health care bill provides coverage to dogs. “Do you know in the health care bill, we’re now offering insurance for dogs?” Beck said on his November 12 radio program. “If you are somebody who is like, ‘Well, I just, I’m struggling and we’re barely making ends meet,’ I’m not paying for your dog cardiologist!” Absence of independent clauses notwithstanding, Beck is apparently referring to a provision in the bill that offers scholarships and loan repayment in an attempt to fill gaps in the public health workforce, which includes agricultural veterinarians who deal with infectious diseases like swine flu. It has nothing to do with health insurance for dogs, and even in the absence of any information about the House bill, a thinking person would probably hear that claim and call bullshit. Presumably, the only federal government of an industrialized nation in the entire world that has thus far refused to offer public health insurance to its citizens would not suddenly start insuring dogs. Apparently, Beck does not regard his audience as thinking people. He also does not regard lying as wrong.

It seems he’s found the right employer, because less than a week after getting busted by the Daily Show for exaggerating the size of an anti-health care protest rally with fake footage, Fox News has done it again. This time, they’ve apologized for passing off old footage of Sarah Palin rallies as documentary proof of the “huge crowds” she’s getting for her book tour. Once again, the apology comes after they got caught, this time by ThinkProgress. Thanks to the First Amendment—which, I think we can agree, is pretty good overall—there’s no law against broadcasting fake video footage and made up facts about pending legislation as if it were actual news. That the second-largest media conglomerate in the world is consistently disseminating misinformation in support of a particular political agenda is just something that we’re going to have to deal with as a people, in the absence of our government’s intervention. That’s probably good practice for our coming corporatocracy anyway, when Rupert Murdoch is far more powerful than any elected official and can dispense with that pesky “provide for the general welfare” stuff in favor of just making money. If he has to use his billions of dollars and control over multiple newspapers and television channels to bring down a couple of Presidents along the way, well, that’s just good business.

It’s times like these that make one want to lie on a chaise lounge with one’s arm across one’s forehead. In the midst of all this intellectual and moral failure, I for one like to refresh myself with a little physical failure instead. Cringe, you fops, at the life of the sportsman. As vitiated as our public sphere may be, at least it is not made of cold metal tubing, and does not rise up to crush our collective nutsacks. Yet.