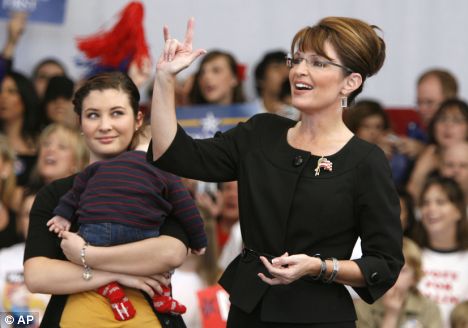 I know you guys are probably sick of Sarah Palin, particularly since our media-industrial complex—of which Combat! blog is now officially a part, with the addition of ads touting anti-health car propaganda and krav maga—has recently devoted itself to covering her full-time. But I remain fascinated by her, in part because it’s either that or the bafflingly long-legged story about the changes in mammogram recommendations, and in part because she is so aggressively stupid and yet so amazingly popular that she must be important. You know, like Uggs. The vague feeling that Sarah Palin signifies something, combined with the frustrating inability to articulate exactly what that something is, isn’t a phenomenon limited to her detractors. It also turns out to be a major impetus for her fans, who—at least until she announces for 2012 and the entire national cackles, half of us with sardonic glee—can’t be called “supporters” anymore. Palin is a politician now in the same sense that OJ Simpson is an athlete. She is an entity in the mediasphere, gossamer but still strangely endowed with the power to affect the material plane, and her fans don’t understand what Sarah Palin means any more than we do. Video evidence after the jump.

First of all, congratulations to MSNBC for finding the only gay male Palin supporter in Grand Rapids, Michigan. Second of all, that’s some mean journalism of exactly the sort that Combat! blog likes, right there. Now that the press has largely abdicated its responsibility to expose the inaccurate statements of our elected officials and commentators, the next best thing is probably to parade the ignorance of the general public. Lord knows it’s amusing. Let us assume for a moment, though, that most people are not stupid. While it’s conceivable that the 1500 people lined up to have Sarah Palin sign copies of their books are all of subnormal intelligence, it’s not likely. Even if they were, they’d still be there for a reason. When Norah O’Donnell points out that Palin fans have a shaky grasp of policy and only a vague sense of what the Constitution might do, she misses the most interesting aspect of the story. These people must love Palin for some reason, and it’s certainly not because they’re political junkies. So what is it?

It’s an empty statement—it’s not like Biden nearly cost the Democrats the election when he flickered and briefly disappeared during the 2008 debates—but in its emptiness is coiled, as Sartre would say, a negation. If Sarah Palin is a very real person, that means that most people aren’t. Barack Obama, John McCain, Joe Biden—to a certain segment of America, all of them came across as liars, and if not as liars than as fakes, and if not as fakes then, well, as somehow bullshit.

Sarah Palin is spouting a bunch of untrue bullshit—in the sense that most of the time, she’s not saying anything—but she’s saying words that people understand. When she answers a question about economic policy by talking about the importance of letting people keep their money and encouraging small businesses because that’s where the heart of America’s economy is, in our small business owners who work so hard and the American people, she’s saying a bunch of bullshit, but at least it’s easier to understand than Joe Biden going on about debt-to-growth ratios. And the American people do work hard—that’s totally true! Isn’t it great to hear a real person talk about real things, rather than all that bullshit about interest rates and market capitalization?

At the 3:20 mark of the video, when Norah O’Donnell confronts him with the fact that Sarah Palin supported the finance-industry bailout during the 2008 election, Joe from Grand Rapids responds by saying that a man whose name he can’t remember “came out and said that they were going to change the rules of what the bailout was for completely” on the day that it passed. Who knows what the fuck he was talking about. You can’t prove him wrong, though, and what he said vindicates Sarah Palin completely. After all, she didn’t do that to the bailout. Isn’t it time we had a real alternative to the people who did?