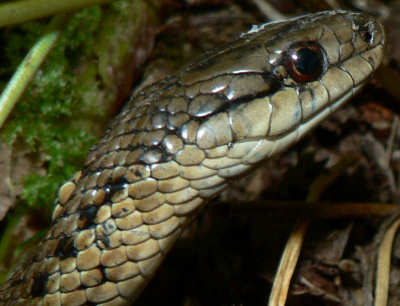 There has been a lot of debate around the Combat! blog offices about whether we should read Going Rogue, especially now that our site is just friggin festooned with ads for it. On the one hand, it’s an almost surely hilarious book about a public persona we’ve spent a lot of time and verbiage trying to understand. On the other hand, it’s 432 pages written by a garter snake and Lynn Vincent, who believes gay people are engaged in a conspiracy to trick America into think they’re victims of prejudice. So we were torn. Fortunately, Maureen Dowd has read Sarah Palin’s book for us. It’s kind of like having the cat watch the dog while you’re on vacation, and Dowd’s report reveals a snake that A) desperately wants us to like him and B) doesn’t really understand the culture of human beings, or even our life cycle.

Consider, for example, Palin’s description of the birth of her daughter Willow. Palin went into labor on the Fourth of July, while kayaking on a lake in Wasilla, and reports that “I so wanted a patriotic baby that I paddled as hard as I could to speed up the contractions.” If that doesn’t bear the glistening sheen of absolute truth, I don’t know what does. The image of a human female—who, upon realizing that she has begun the process of disgorging a juvenile human while sitting in a kayak in the middle of a large body of water, deliberately exercises her abdominal muscles in order to ensure that her offspring will emerge more quickly, so that her birthday might coincide with the anniversary of the founding of Human Capital—is something we can all relate to. In her appreciation for live birth and paddling, she is like our other beloved man-female, Sacajawea.

So the snake that operates Sarah Palin is maybe not up on all the details of human biological experience. He also seems to have misunderstood certain aspects of our culture. Palin takes pains to dissociate herself from the infamously seamy underworld of Juneau politics, writing that “Politically, Juneau always had a reputation for being a lot like Animal House: drinking and bowling, drunken brawls, countless affairs, and garden variety lunchtime trysts.” At this point, the snake should just admit that he hasn’t seen Animal House. I mean, bowling? In his effort to think of four things that humans do when they get all crazy, he came up with “affairs,” “trysts,” “drunken brawls” and “drunken bowl.” It’s like he wrote the book using a Boggle game.

The snake is in trouble, and he knows it. All it takes is for Katie Couric to seize the Palin replicant and cut through its skein of synthaflesh to reveal the levers and pulleys underneath, and the game will be up. “We felt our very normalcy, our status as ordinary Americans, could be a much-needed fresh breeze blowing into Washington, D.C.,” he writes of Palin Mark I and Todd’s decision to join the McCain campaign, and you can feel him straining at the controls. To paraphrase Shakespeare, methinks the snake that operates Sarah Palin doth protest too much.

As Richard Kim and Betsy Reed, non-snake authors of the Palin parody book Going Rouge, point out, Palin has always been an insider pretending to be a political rogue. Now that she is literally inside an elaborate robot, the problem has only gotten worse. Alaska ranked #1 in pork barrel spending in 2008, and Palin Mark I was embroiled in numerous shady dealings with oil companies, developers, and other powerful forces that blurred the line between politics and business. As the only “average hockey mom” in America to get paid $7 million to write a book this year, Palin Mark II and the snake that pilots it are under increasing pressure to look, you know, real. One would have to be terribly cold-blooded not to pity the snake—coiled in the belly of the Palin II, frantically working the controls, straining to hear Oprah’s questions over the whir of gears and the pounding of pistons. He is just a snake, after all, and he wants only to be loved. He can only be provoked so much, though, and sooner or later he is going to bite somebody.