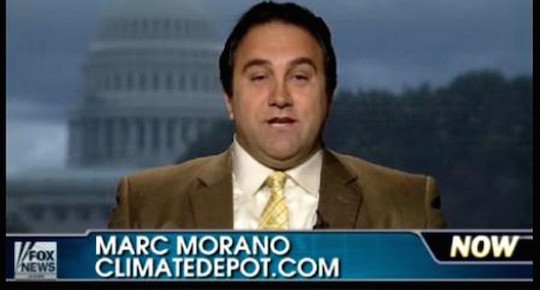 I assume that suit salesmen everywhere can spot a liar, and they know what to do when one walks in. “Let me show you the olive brown,” they say. “It looks trustworthy.” Marc Morano is intrigued—not for himself, of course, but as a gift for his mother, who wears men’s suits as a sexual thing. “She’s exactly my size,” he says. Thus do sales associates perform a national service—but do we heed them? We do not. Some of us1 let Marc Morano of Climatedepot.com talk on our televised current-events shows, and we wind up broadcasting into space messages like this:

If the aliens hear that, they’re just gonna lose all hope. Video after the jump.

Google is considering a plan to make accuracy a variable in its search ranking algorithm, and Morano is against it. It is not because his website, Climatedepot.com, ran the headline Children Won’t Know What Blood Looks Like: Harsh Winter Leads to Decreased Blood Donations. That headline, which turns out to be a link to a story about how the Red Cross of Boston canceled blood drives due to weather, arose from Morano’s sincere desire to avert a nightmare future in which children are unfamiliar with the sight of blood.

And neither accuracy nor a child’s natural desire to look at bags of human blood had anything to do with Morano publishing the email addresses of scientists who write papers about climate change. He just wants the people to decide if those professionals’ analyses of scientific data are correct, and then express their conclusions by threatening to rape those scientists in hell.

The problem with instrumentalism is that it did not build the steam engine. From an instrumentalist perspective, the success of science is difficult to explain. Karl Popper insisted it was a miracle, which preserved the unity if not the dignity of his philosophy. The vexing superiority of scientific realism to popular consensus when it comes to predicting things2 is the insoluble problem of instrumentalism. But it is the starting point of the scientific method.

I mention this because it seems like we could warm the planet to the point where millions of us die. That is a hypothesis many scientists believe. By trying to make his own3 counter-hypothesis instrumentally true, Morano is forcing an experiment. We’ll keep doing what we’re doing, and either millions will die or not.

Then we’ll know whether the man in the olive suit speaks truth. Let’s let the public decide what’s true, either by dying en masse as they realize scientists were right, or by hailing Marc Morano as one of the few visionaries of his generation.

The best part is that we don’t even have to settle the debate between instrumental and realist constructions of truth. The natural environment will do that for us, either by destroying the underpinnings of our civilization even it ceases to sustain us in our natural state, or by gettin’ cold. Not too cold, though. We all just need to believe that everything will be okay, and we’ll be right.