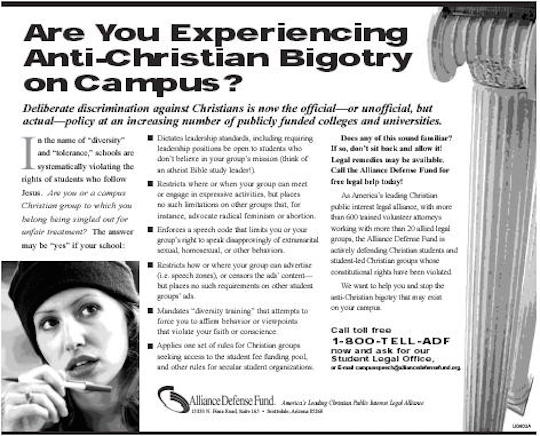 An ad from the Alliance Defense Fund urges students to report discrimination.

Look at the kicker in that ad: “Deliberate discrimination against Christians is now the official—or unofficial, but actual—policy at an increasing number of publicly funded colleges and universities.” It’s like the copywriter caught himself lying and then convinced himself what he was saying was basically true anyway, all in the space of one sentence. Welcome to the age of creeping mendacity, where telling the truth is less important than getting people to believe what’s true. It’s a subtle difference—so subtle you can use it to trick yourself. Today is Friday, and the truth is too important to let other people sort it out for themselves. Won’t you conflate “correct” and “honest” with me?

First, the good news: even though the Supreme Court seems poised to approve gay marriage, Christians across America will be protected from bigotry by laws affirming their right to refuse to serve gay people. It’s a pretty standard anti-discrimination law, if you are a hole in the ground posing as George Orwell’s ass. Here’s the sponsor of one such bill explaining why civil rights for gay people are actually institutionalized discrimination against church people:

“The L.G.B.T. movement is the main thing, the primary thing that’s going to be challenging religious liberties and the freedom to live out religious convictions,” said State Senator Joseph Silk, an Oklahoma Republican and the sponsor of a bill in that state. “And I say that sensitively, because I have homosexual friends.”

That’s how you know you are speaking unprejudiced truth: you have to point out that some of your friends belong to the broad class of people you’re talking about. The tortuous doublespeak necessary to call these laws defenses of individual rights rather than permits for bigotry is impressive. Here’s Scott Craig of South Dakota on his failed proposal to offer Christian businesses religious exemptions from anti-discrimination laws:

“When government wants to infringe on your conscience, then you need to be protected, and in America, we want to protect everybody.”

“We” meaning anyone who might be listening to him, not Craig himself. Craig’s law is explicitly and specifically about not protecting homosexuals.

Meanwhile, Mike Bowers—the Georgia attorney general who defended the state’s sodomy laws before the US Supreme Court in Bowers v. Hardwick,1—has publicly condemned another proposed religious liberty statute as “an excuse to discriminate.” Big, throbbing props to Adam Grogg for the link. Bowers took up the issue after Georgia Equality asked him to analyze a bill granting conscience exemptions under the Religious Freedom Restoration Act. His assessment:

“I thought it was just terrible, absolutely terrible. I believe it’s not that complex. All this is for is to discriminate. If you’re not going to discriminate, you don’t need the darn thing.”

But it’s part of the Christian religion to hate homosexuality—not homosexual people, of course, but their behaviors, including getting married and/or having a job. By definition, you can’t stop discriminating against one group without discriminating against the people who discriminate against them. In order to save space, I’m going to just refer to such people as “Christians.” Here are Todd Starnes and Tony Perkins explaining why New York City schools’ decision to close for two Muslim holidays discriminates against Christians:

Perkins: But yet when it comes to Christmas and Easter, two very prominent Christian holidays, they’re not on the school calendar, they’re called ‘winter break’ and ‘spring break.

Oh yes. Note the conflation between discriminating against Christians and minimizing their special privileges: in a country where 85% of the population identifies as Christian, giving everyone two weeks off for Christmas but not explicitly saying so is discrimination. So is offering even one day off for any other religion.

It’s hard to keep track of all the organizations discriminating against Christians by not doing what they want. Fortunately, the American Family Association has produced this handy map of anti-Christian bigotry in America. There’s only one such hate group in Montana: the ACLU. The AFA classifies that organization as Anti-Christian: one that “actively engages in the complete eradication of the Christian faith from society, government and private commerce.” Compare to Iowa Atheists & Freethinkers, a group that “does not believe in God and is critical of those who express their faith in public.

That’s the rhetorical outcome of this systematic conflation of homophobia with religious freedom and Muslim holidays with discrimination: not being Christian is bigotry against Christianity. It’s like the way American Indians persecuted the colonists, or black college students persecuted George Wallace. It makes perfect sense, provided you have no interest in the truth and care only for what you can get away with.

God damns all liars, as The Crucible reminds us. You remember that one: the play about a witch who persecutes the Christians of 17th-century Salem by having an affair. I don’t quite recollect how it ends, but I’m pretty sure the good guys won. That’s how the survivors remember it, anyway, and who am I to discriminate against the majority?