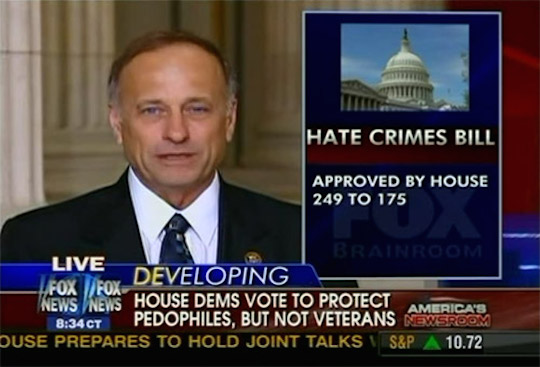 As Politico’s Dylan Byers points out, more respondents may have chosen Fox News as their most trusted source because other networks split the moderate and liberal vote. Fox is openly aligned with conservatism and, in most cases, the Republican Party. Part of its gimmick in being openly to the right of other news networks is insisting that all other news sources are biased—read: more liberal than Fox News. Thus does obvious bias become, from the inside, a monopoly on honesty.

No other single network has so strongly aligned itself with one political party, and so no one network can lay claim to a comparable audience of trusting viewers. The apparent exception is MSNBC, but that network’s attempt to situate itself as the liberal counterpart to Fox News has failed. A mere 7% of respondents said they trusted MSNBC most, suggesting that liberal viewers are more likely than conservatives to mistrust an evidently biased source. The network’s poor ratings support this explanation.

The answers to similar question that differs in important ways—“do you trust the journalistic coverage provided by Fox News”—look a little different. Only 20% of respondents said they trusted Fox News a great deal, with another 35% answering “somewhat.” The combined numbers in those two categories are higher for every other network except MSNBC.

“At least somewhat trusted by 55%” is not nearly as snappy a slogan as “fair and balanced.” On the other hand, I think “consolidating an audience of uncritical fanatics” could really take off. Rupert Murdoch can have that one for free.