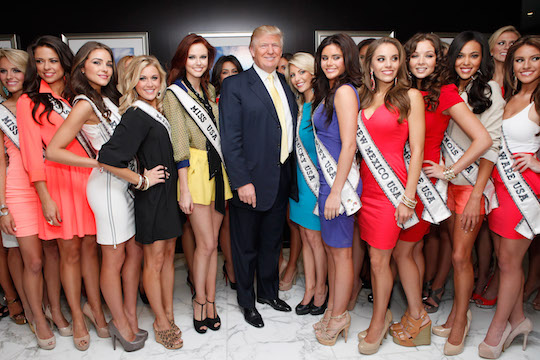 First let me say the fair sucks this year. Lundberg County used to be one of the top fairs in the world, but now Jasper County, Powesheik County—these fairs are murdering us. And it’s because our pork queens are stupid. But when I am Lundberg County Pork Queen, I will make this fair great again.

From the boardwalks of Atlantic City to the finest Pacific rims, the Trump name means poise, congeniality, and talent. My character is upstanding, and my knowledge of agriculture is huge. I could spin a—believe me, I can spin a majorette stick. I will throw that stick in the air, and I will turn around twice and catch it. I’m talented—I can tell you that.

So I will be great at representing pork. The most luxurious representations are what I promise you. Just the Trump name will put pork among the classiest meats in the world.

Unfortunately, the Lundberg County Fair is not what it once was. The pies are seedy. The Tilt-a-Whirl whirls too slowly but tilts too fast. And the candidates for Pork Queen are, I’m sorry to say, pigs. Not the good kind of pigs, like I will represent for you, but the bad kind of pigs, like human women.

I know, because I have been with some of the top women in the world. Now, as a candidate for Lundberg County Pork Queen, I am one.

But these other girls are stupid. They want to be queen of Lundberg County, one of the top pork producers—anymore not so much, but still, one of the top pork counties in the world—and they stink. A lot of people don’t want me to say that, but it’s true: these girls between the ages of fourteen and seventeen, who are running for the office of Lundberg County Pork Queen, stink.

They put the midway next to the parking lot, so carnies cross over and rob our cars. They put the funnel cake stand next to the sheep barn, which ruins it, I can tell you. And six dollars for admission! When I was a kid, you could get into the fair for fifty cents. But these other pork queens—Mahaska County, Schueyville—they’re smarter than our pork queens, so now everything costs more.

These other candidates for pork queen aren’t—Rachel Baumgartner? Is that—I’m sure she’s a lovely person, but is she even from Lundberg County? Many people, they hear Rachel, they don’t think that’s a pork name. I don’t mean this about her personally. She’s a beautiful girl; she’s just indicative of the kind of person who runs for pork queen today. I love Rachel. Kind of a lisp, I think, but it’s because she wears a retainer.

I, on the other hand, am touched with the rude blush of life. My hair stirs in the breeze, and my simple country dress belies a budding femininity. Like all the greatest women, I am a beautiful object, but I am also a successful businessman.

I’m not one of these career pork queens. I made billions of dollars doing fantastic deals, and I don’t apologize for that. These other girls, they get an allowance, and then they have to do what their parents say. I’m not accusing them—I’m not saying that’s wrong. I’m saying that’s how it works. If Rachel’s father—Herschel Baumgartner or whoever he may be—if he says hey, I need you to represent that pork is bad, she has to do it or she won’t get her allowance. It’s interesting.

I don’t have to do what anybody says. I’m rich, and all possibilities are open to me. If I want a carefree midwestern girlhood, I made ten billion dollars, so obviously, I can have that.

And although I am a little older than the other candidates, I think you will agree my quiet dignity makes up for it. That’s why you should select me, Donald Trump, as Lundberg County Pork Queen. I would also settle for judging the pageant next year.