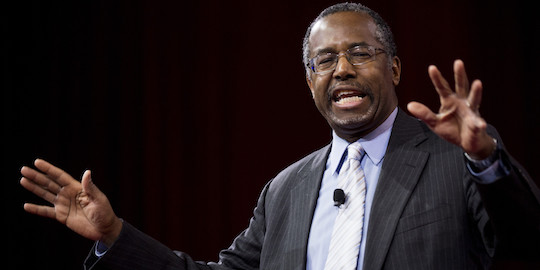 In an interview with Wolf Blitzer last week, Ben Carson said that Mahmoud Abbas, Ali Khamenei, and Vladimir Putin all knew each other at Moscow’s Patrice Lumumba University in 1968. It seems unlikely that the president of Palestine, the supreme leader of Iran and the homecoming king of Russia would all become friends at communist college—serendipitous even. And, lo and behold, it didn’t really happen. At least it didn’t in that nitpicking, fact-checker sense that there’s no evidence for it. When Politifact asked the Carson campaign where they got their information, they responded:

Thanks for your inquiry. We are not in the habit of providing Googling support to the media. If there is a specific aspect of Dr. Carson’s statement that you wish to challenge, please let us know and we can go from there.

There’s a unicorn in my refrigerator. Prove me wrong, dicks.

Over at the New York Times, Trip Gabriel suggests that the Carson campaign has embraced its candidate’s proclivity for just sayin’ stuff, since Carson’s remarks about the possibility of a Muslim president1 somehow improved his poll numbers. Like his insistence that an armed Jewry would have better resisted the rise of Hitler, this claim disgusted experts but thrilled the Republican base.

Therein lies the problem. Of the four candidates for the Republican nomination who are viewed more favorably than unfavorably by their party’s voters—Donald Trump, Carson, Carly Fiorina and Marco Rubio—three have invested heavily in the just sayin’ stuff strategy. Trump continues to address crowds like he’s in the second half of a best man’s toast, and Carly Fiorina is sticking by her description of a Planned Parenthood video that everyone else agrees does not exist.

In an ideal system, that kind of gleeful disregard for accuracy would hurt them. In our system, it seems to have helped. Fiorina has plummeted in the polls since she delivered her Planned Parenthood whopper at the last debate, maybe because everyone realized it was untrue or maybe because she hasn’t said anything nutty since. Trump and Carson, on the other hand, have held first and second for months. It might be unfair to ascribe their success to loose talk, except there are no other remarkable elements to their campaigns.

Neither has held elected office. Both tout their status as Washington outsiders, a pleasant euphemism for inexperience. In theory, such an outsider would have to demonstrate exceptional policy knowledge to overcome the assumption that any experienced candidate would know more. But a substantial portion of Republican voters think of themselves as outsiders, too, and they know what’s best for America. Ergo:

“That is the problem we have now,” said Martha Johnston, a retired surgical nurse in Waterloo, Iowa, who wants a Trump-Carson ticket, or perhaps Trump-Fiorina. “There is no one in those administrative positions that is qualified to be doing the jobs they’re doing.”

That’s the voice of ignorance right there: no professional government functionary knows how to do his job, but I am qualified to evaluate them. It sounds improbable when you put it that way, but when you leave off the second part, it’s conventional wisdom.

A better electorate probably wouldn’t fall for that, but the point is moot; you go to 2016 with the voters you have, not the voters you want. I think the more actionable concern is that better leaders wouldn’t appeal to our worst instincts this way.

Maybe Carson’s hubris is so deep that he genuinely believes his skill as a surgeon makes him a better politician than senators and governors. Perhaps the plan in Trump’s head really is no more detailed than “get there and do a great job on day one.” But a willingness to present that kind of groundless confidence to voters as a sure-fire strategy should disqualify them from office.

A leader should be better than the people he or she leads. The ideal president would encourage Americans to be better—more conscientious, more willing to look for expertise or at least accurate information to run the country better. Telling them that their ignorance is better than professionals’ knowledge is not leading them. It’s pandering.