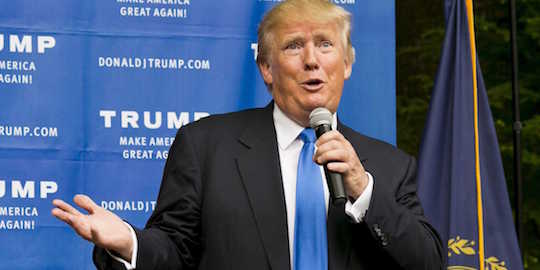 What’s the deal with Mexicans?

In a parallel universe, “Donald Trump runs for president” is a pretty funny sketch. It could be the cold open on Friday Night Fun, perhaps with host Michael Richards as his exasperated opponent.1 Comedy Trump is supposed to talk politics, but he only speaks in vague, hyperbolic terms about what a great businessman he is, and everyone finds it hilariously absurd. It helps that we all understand critical thinking from our free liberal arts educations, courtesy of President Sanders. Today is Friday, and the line between our world and one invented to amuse better versions of ourselves is thin and permeable. Won’t you try to distinguish comedy from reality with me?

First, the good news: the woman who opened fire on suspected shoplifters in the parking lot of a Michigan Home Depot has not been charged with a crime. The bad news is she could be, since some kind of loophole in the Constitution says it’s still attempted murder if you try to kill someone who’s being chased by security guards.  As Michigan Live helpfully instructs, “Opening fire on a person without malice or injury in Michigan is a misdemeanor punishable by up to a year in jail.” How you could open fire on a person without malice is a question for the lawyers, I guess.

Meanwhile, in the world of ridiculous things that didn’t happen, Jack Handey has written a robust defense of the Extremely Loud Doorbell Company. Handey is a master. The Stench of Honolulu is the funniest novel of the 21st century—way funnier than The Road—and you should read it. One of my favorite elements of his style is his technical mastery of joke structures, including but not limited to the misdirection gag. Consider this biography of the founder of the Extremely Loud Doorbell Company:

He observed that, when a gentleman went calling and rapped his cane on a front door, it often took an annoyingly long time for someone to answer. That’s when he founded the Extremely Heavy Cane-Head Company. The company prospered, and he grew rich. But he could not have foreseen the advent of thin, easily breakable doors.

Plenty of funny writers would have just cruised through this description and relied on its old-timey quality to smell like a joke, as they say. But as soon as Handey can see where the joke is going, he recognizes an opportunity. It’s because he trusts us to see it, too.

You don’t have to be a technician to write funny satire, though. Consider this hateful but amusing essay by Lucy Woodhull in Reductress, If You Wanted to Use the Sidewalk, You Should Have Had Two Babies Like Me. Props to Camo for the link. I like comic writing where you can tell the author is really into it. I also like stroller shaming, probably because I was a small child during the era of the umbrella stroller, not the kind with cupholders and inflatable tires. In the future, everyone will push wheelbarrows full of stuff. The stuff is silicon we dug out of landfills for our robot overseers.

But why wait until the future to be the slave of robots, when you can work for free at Urban Outfitters this weekend? On Tuesday afternoon, salaried employees at the retailer’s home office in Philadelphia got an email inviting them to volunteer for six-hour shifts at its shipping warehouse. Quote:

October will be the busiest month yet for the center, and we need additional helping hands to ensure the timely shipment of orders. As a volunteer, you will work side by side with your GFC colleagues to help pick, pack and ship orders for our wholesale and direct customers. In addition to servicing the needs of our customers, it’s a great way to experience our fulfillment operations first hand. Get your co-workers together for a team building activity.

Usage note: “serving” the needs of customers sounds less sexual than “servicing” same. Perhaps the greatest achievement of the modern age is employers’ increased ability to make work sound like an opportunity. Who wouldn’t want to experience fulfillment operations firsthand? Hint: anyone who has ever worked in a warehouse.

You’ve got to work your way up, though. You start picking and packing for free in the warehouse, but once you make it to management, you can get away with anything. Just look at Vice-President Joe Biden:

“I need you to use some of that sweet black magic of yours.” Onion Studios continues to hire the best deadpan actors in the business. You will know it’s funny when no one has to embarrass herself selling it. That’s how we know Trump is sad, and therefore real.