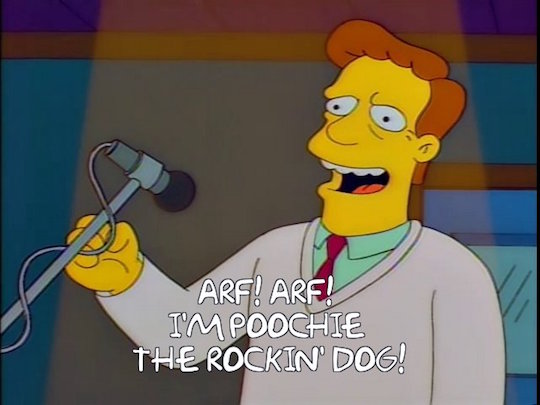 I got pretty excited when I read the headline Clinton Barks Like a Dog to Taunt GOP. That’s the kind of behavior Democrats need to close the absurdity gap with the Republican candidates, who currently hold a massive lead in generating funny stories for The Hill. But it turns out Hillary was not barking to drown out the sound of Ted Cruz or assert her resemblance to Smokey from Friday. She was just telling a story about one of her favorite political advertisements, which featured a fact-checking dog:

One of my favorite political ads of all time was a radio ad in rural Arkansas where the announcer says, “Wouldn’t it be great if somebody running for office said something [and] we could have an immediate reaction to whether it was true or not. Well, we have trained this dog…if it is not true, he is going to bark.” And the dog was barking on the radio so people were barking at each other for days after that. I want to figure out how we can do that to Republicans. We need to get that dog and follow them around and every time they say these things like, “Oh, the Great Recession was caused by too much regulation,” arh, arh, arh, arh.

How can I trust The Hill when they believe a dog says “arh?” Dogs clearly say “woof” or, in Canada, “arf.” But I’m more interested in the pop this story got from the audience at the end, since it was in no way funny. Video after the jump.

I’m glad to see that a candidate for president with a 30-year career in politics still can’t resist explaining funny commercials to people. It makes me think I might be normal, or at least employable. I also think I might be able to help the Clinton campaign “figure out how we can do that to Republicans.” Given that the fact-checking dog was a political ad to begin with, I think I can adapt it into a spot attacking Republicans in, um, 22 billable hours.

But I could not produce any more laughter at this anecdote than the crowd in Reno. Just listen to that pop at :35. She’s not even barking yet. She has merely established the premise of a dog that barks at lies in the context of a political advertisement, and then suggested applying that concept to a political campaign. Monster laughs ensue.

I want to focus on this part of the joke, because it doesn’t involve the confounding factor of a former secretary of state making animal noises—something you could argue is inherently funny. The “let’s sic this fact-checking dog on Republicans” conceit is an example of the joke technique called mapping. Mapping takes the structure or operating principles of one situation and projects it onto another. This video,1 “If people were treated the way we treat pets,” is a pretty straightforward map. So is Donald Trump For Pork Queen. The map is a premise, so it’s not inherently funny. But its potential for humor is directly proportional to A) how counterintuitive the map is, and B) how well the original structure fits the new situation. Like a good ending, a good map is surprising but, in retrospect, inevitable.

Hillary’s fact-checking dog map is not surprising, because it takes the operating principle of one political context and applies it to another political context. It’s like wondering what would happen if we rode on subways the way we ride on streetcars. But the crowd erupts as though this notion were a delightful fancy. I submit that is because the standards for humor are much, much lower for political candidates than they are for nearly any other kind of public speaker. And while we’re bandying unfalsifiable theories, I submit that’s because politicians so rarely say things that are surprisingly true.

At the risk of sounding like a barking dog, politicians say fewer true things than most. But the truths they most scrupulously avoid are the ones in which comedians and humorists traffic: truths that are unacknowledged or unpopular. Your Donald Trump may claim to speak unpopular truths, but really he’s “saying what we’re all thinking,” i.e. what is popular but not true. More conventional politicians are careful to say what is true or maybe not true but definitely popular. As a result, anything that resembles a joke or an unconventional insight is greeted as a breath of fresh air.

I think that’s especially the case for Hillary Clinton, whose public presentation is so polished. Partly because she is not a natural speaker, and partly because she has spent the last 25 years under minute scrutiny, any glimpse of whimsy from her is startling. Maybe that’s the incongruity that is making this map joke work: not the projection of political ad onto a political campaign, but the projection of silly political communication onto her very serious style. Please, Mrs. Clinton, get that dog.