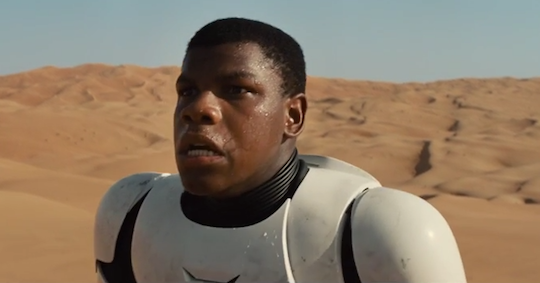 An example of today’s bias against white males wears a storm trooper outfit.

Donald Trump is bad, but so far we have understood him to be bad and special. He is particularly shameless demagogue, and because we live in interesting times, desperate millions have fallen under his spell. But we don’t imagine those people are emulating him. The Republican Party is not full of voters who are like their nominee. The country may be in the grips of Trump mania, but at least the symptoms of our Trumpomaniacal episode do not find us mimicking his behavior. Unless:

This review of Star Wars: The Force Awakens, collected by Amazon Movie Reviews on Twitter, appears to contain a Trumpean exclamation. Granted, there’s no exclamation mark. But it nonetheless ends a declarative statement by ejaculating a single adjective that tells you how to interpret that statement, in the style established by Trump himself. Similar!

At the risk of introducing an element of conjecture, this Amazon customer also seems to echo some of Trump’s themes. In declaring Star Wars “just another anti-white male movie,” he1 participates in the conceit that America’s dominant ethnic/gender identity is under attack. That notion is absurd—if Hollywood really cared about males, it would have put more of them in its seventh goddamn Star Wars movie?—but so is the reviewer’s ability to reserve for white people cultural touchstones that don’t have much to do with race.

I was not aware that Star Wars was for little, specifically white boys. I guess you can understand it not as the tale of a farm kid called by destiny to grapple with the powerful forces in the universe and himself, but rather as the tale of a white farm kid called by destiny to et cetera etc. But who thinks like that? I heard the funniest joke from a white bartender today. Richard Nixon was the only white president to resign. White people who need white people are the luckiest white people of all.

Anyway, that’s why you see white dads wearing shirts with pictures of Chewbacca on them and black dads wearing Webster. Either that or both Trump and this Amazon movie review reflect the decades of rhetoric that actually did, in the words of the reviewer, make diversity a code word for anti-white male. Since the Southern Strategy, the Republican Party has articulated policies against minority groups not in terms of their inferiority, but in terms of the rights of those who would dominate them. Gay marriage undermines straight marriage. Every black stormtrooper is a white dude who wasn’t. When the sixth sequel to the movie about the brave white boy features a girl and a black man who doesn’t betray us, it’s anti-white males

Like the Trumpean exclamation, that is a trope people can understand. They might even believe it, the same way they might come to believe that blurting out an emotion is how you keep your audience with you. I wrote you this poem for Valentine’s Day. Romantic! To us, these manipulations are transparent rhetoric. But they are ideas to the people who get caught up in them. Politics does not just rally votes. It teaches voters how to think. Probably, we should all get a little more scared and serious soon.