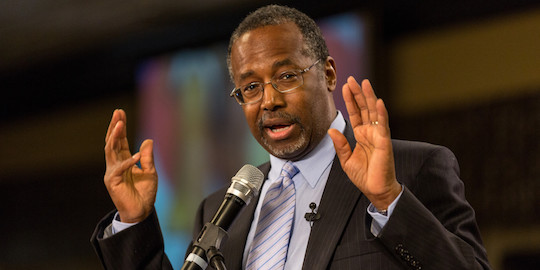 By now you have heard of Ben Carson’s rap ad, which is playing on urban radio stations across the southeast and in waiting rooms throughout hell. You can listen to it here, or just wait to hear it bumping from a Buick Lucerne. It’s possible Carson should not have made a rap ad. The circumstances that led him to do so seem fortuitous: self-described “Republican Christian rapper” Aspiring Mogul, aka Robert Donaldson, sent a song to Carson’s campaign manager after seeing the biopic Gifted Hands.1 The Carson campaign put Asp-Mo’s song on its Facebook page, and from there it was a logical step to collaborating on a rapping campaign spot that goes like this:

For the purposes of this discussion, I ask you to accept two premises that less charitable interlocutors might deny:

Today rap belongs to the world, but it emerged from and is still overwhelmingly created by black urbanity. If you disagree with premise (1), you are either Tom Hanks’s kid or assessing American culture with a completely different set of tools from me, and we probably won’t get anywhere with premise (2). But I believe Dr. Carson is about as natural a fit for rap as this guy:

From the standpoint of premises (1) and (2), Carson has no more business releasing a rap ad than Lindsey Graham has with a tap-dancing ad. But the whole thing starts to make a kind of sense when you add a third premise: Ben Carson is black.

He is the only major-party candidate for president who is black, and he is also the only one who has released a rap-based campaign advertisement. He is about as far as anyone could be from hip-hop culture, or at least he is tied for maximum distance from that culture with all other people seeking the Republican nomination for president. But would you call that contest for affinity with hip hop a 15-way tie, or would you give the edge to the corny old person who is ethnically black?

If you think about it long enough, the reasoning becomes a problem. If you put all 15 Republican presidential candidates’ pictures on a sheet and asked people, “Which one is rap?”, you would get a pretty good survey of American racism. Who wouldn’t circle Carson? But in what way is he a logical fit with hip hop, except for the color of his parents’ skin?

I submit that white Ben Carson does not make a rap ad.2 The bad beat, throwaway rhymes and essential absurdity of this campaign spot demonstrate that he and his managers are not hip hop heads. But they believed it would work. Having listened to the form probably very little, and having understood it not at all, they figured a rap ad would help their black candidate win over urban voters.

I suspect it will not. I also suspect that such reasoning reflects an increasingly popular fallacy in American discourse: that who you are is more important than what you do.

Clearly, Carson has not done rap. He has not made it himself, nor has he listened to it attentively. He was busy with other stuff, like brain surgery, childrearing, and megalomania. That’s cool. But having participated not at all in hip-hop culture, he still felt comfortable co-opting it for his campaign.

Maybe that’s a testament to his outsider politics. If a man who has never held elected office can be president, why can’t a man who never heard 36 Chambers produce rap? But maybe Carson is participating in the same periodically hurtful fallacy we all are: that your skin tone comes with a culture in which you will always participate, no matter what you actually do after you are born. Perhaps that’s true. But perhaps—at least on the fringes, where people become brain surgeons and run for president—it is obviously not.