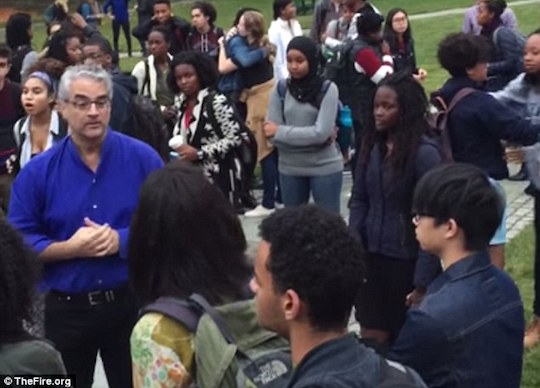 Don’t get me wrong: it would be pretty exciting if they were. If the young woman who told Professor Christakis that his job “is not about creating an intellectual space…it’s about creating a home here” represents the views of her generation, it would be the perfect unfalsifiable trend story. It combines attacks on free speech—a value we pretty much all agree on, when we are not encircling our professors and screaming at them to apologize/be quiet—with America’s changing sense of minority identities with the theory that millennials are spoiled assholes. It’s pretty much the best thing that could ever happen to Jonathan Chait.

But is it real? Last month, when Wesleyan students sought to defund the student newspaper over an editorial criticizing Black Lives Matter, it turned out that there were only about 170 of them. That’s 5% of Wesleyan’s total enrollment. Reports from the Yale campus put about that number of protestors outside last Friday’s William F. Buckley Jr. Program on free speech, where panelist Greg Lukianoff remarked that students were acting like Erika Christakis “burned down an entire Indian village.”

That was a dumb thing to say. By the time the panelists left, a couple hundred students were outside changing “genocide is not a joke.” A fair reading of Lukianoff’s remark would conclude he presented genocide as something very bad, but would you deliver that line to a roomful of American Indians?1

According to panelist Kevin Williamson in the National Review, protestors spat on him. He refers to those protestors as “idiot children” throughout. Advanced writing tip: if you find yourself using the word “idiot” a lot, maybe you should refine your take. It’s tempting to conclude that kids today are spoiled rotten and incapable of perceiving nuance, as Williamson seems to:

There is a certain strain of upper-middle-class American culture that cultivates an excess of self-importance that grows cancerous when it isn’t counteracted by a deep understanding that the world is full of things that are much more important than you are: God, country, the rest of the human race.

But those “idiot children” are absolutely preoccupied with things they consider more important than they are: maybe not God and county, but definitely other members of the human race. They may shout their arguments in terms of creating “safe spaces” for themselves, but they are expressing the idea that both history and present systems have been deeply unfair to any non-majority group. They have found a moral cause, and it’s one they consider much more important than themselves.

Their plan of action for addressing that cause is pretty dumb. Restricting free expression on college campuses is not going to do a goddamn thing for queer Palestinians or early-childhood education in Brownsville. But the problem here is not that college students hate free speech. The problem is that they are confined to college campuses, where speech is pretty much the whole world.

Most of those Yale students have parents who put up $45,000 in tuition a year, plus room and board and iPhones. Those who are on scholarship are enjoying a respite from money crisis for maybe the only time in their lives. Of course they think an email suggesting the university not censor Halloween costumes makes them unsafe. Of course they believe speech is tantamount to violence. Speech is the only thing they experience. It is their world, and they know their world is unjust.

It’s deeply alarming to see college students demand protection from ideas. That’s not what learning is about. I personally believe that the free exchange of ideas and the principle that speech is never equivalent to violence are foundational to a good society. But I think it’s absurd to claim that kids today hate free speech. We hate kids today. And they hate everything but perfection, as we taught them to.