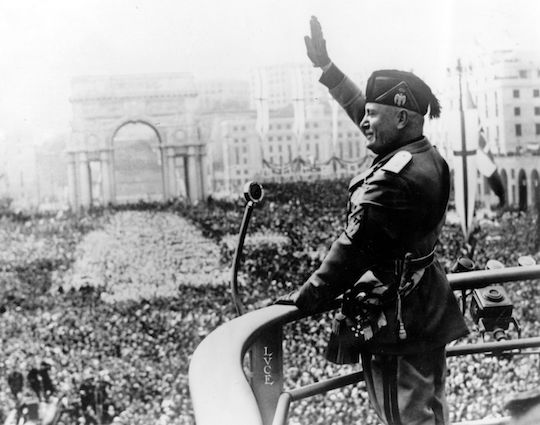 Fascism: nobody know what it is, but it’s probably happening. Bane of the high school history teacher, Fascism is hard to define, probably because we know it when we see it. Specifically, we knew it when we saw Nazis and Italian corporatists start a world war with it. But Mussolini called fascism fascism before he became history’s most humorous monster. Like a nation, fascism is an idea. It stems from events but transcends them. And like a nation, fascism can live as an idea after it occupies no territory. The state is more important than the individual. We need a leader who can get things done, working with corporate power instead of against it, belligerent abroad and supervisory at home. We love this country, and we can take it away from those who don’t. Today is Friday, and I sure am glad that ideolgoy doesn’t describe any political movements now active in America. Won’t you evade responsibility for it happening here with me?

First, the good news: strong national religion has pulled even with corporatocracy in the race to exploit a weak governing class. The bad news is we’re talking about Ben Carson and Donald Trump. That set of comedy/tragedy masks might bear the faces of American fascism, says Thom Hartmann on Alternet (via the publicly humiliating Salon.) Sure, they’re xenophobic demagogues. But what’s really exciting about them is their belief in the awesome power of business. Hartmann quotes former Vice-President Henry Wallace:

If we define an American fascist as one who in case of conflict puts money and power ahead of human beings, then there are undoubtedly several million fascists in the United States. There are probably several hundred thousand if we narrow the definition to include only those who in their search for money and power are ruthless and deceitful. … They are patriotic in time of war because it is to their interest to be so, but in time of peace they follow power and the dollar wherever they may lead.

We’ll be fine as long as they don’t start expressing disdain for expertise. Meanwhile, among the heroes of law enforcement and our military, the story of Charles Joseph Gliniewicz keeps getting sadder. When Officer Gliniewicz was found dead after calling in a chase in September, the community of Fox Lake mourned him as a cop killed in the line of duty. Now it appears he committed suicide after embezzling “five figures” from the Police Explorer program. He used his experience mocking up crime scenes to stage his own murder, setting the authorities on a manhunt that cost about $300,000.

I don’t care what that guy did: all police, firefighters and soldiers are heroes, and I’m pretty sure so are employees of the TSA. The only thing more important that honoring the champions of the state is locating our national identity within an ancestral tradition. Any ancestral tradition will do, as long as God is in it and someone else is out. Back in 2005, a joke by Emo Phillips organized around just that principle was selected as the best God joke ever—without being credited to him.1 When he found out, he accepted his prize with an open letter in The Guardian. You can watch Emo deliver his joke here:

Fortunately, no one is trying to identify the United States with a single religion, and no other religion has been named as a global threat. Also, I can sell you that bridge Emo Phillips mentioned.