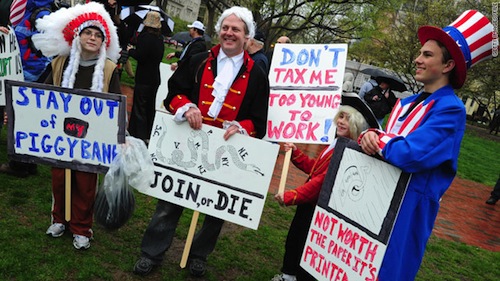 Go ahead and dress up your dorky son as an Indian. You probably won’t run into any.

In the aftermath of this month’s federal government shutdown, a Washington Post-ABC poll has found that approval ratings of the Republican Party have fallen to an all-time low. Sixty-two percent of Americans say they hold an unfavorable view of the GOP, with 40% describing their views as “strongly unfavorable.” Eight in ten disapprove of the shutdown. Tea Party-identified voters overwhelmingly blame Obama for the shutdown, but mainline Republicans blame their own party almost as often as they blame the president. It’s starting to look like the promise of future budget negotiations wasn’t worth it.

It would be fruitless to imagine what the Republican Party’s present political situation would look like if they hadn’t shut down the government on October 1. We cannot know the future, as the saying goes, and we are probably too dumb to the know the past, either. Still, while congressional Republicans were laser-focusing the news cycle on their own intransigence, the other guys were committing an ugly blunder themselves. They tested the health insurance exchange platform, learned it didn’t work, and then rolled it out anyway.

In simulations, the HealthCare.gov site—designed to accommodate tens of thousands of users logging in at the same time—crashed with just a few hundred simultaneous logins. When it went live, hundreds of thousands of people tried to connect at once, crashing it like 2007 Twitter. The Obama administration underestimated the number of people who would use HealthCare.gov by an order of magnitude, failed to meet even their bafflingly wrong estimate, and still plowed ahead.

The site was riddled with known problems as much as a month before rollout, in part because the 55 different contractors working on its development could only connect with one another through the administration. At least one of them urged a delay of the national launch, but that didn’t happen. Now the technical problems and access issues they cause might result in a de facto delay of the individual mandate. Here’s Jay Carney:

That is some grade-A dramatic irony, right there. Right after shutting down the government turned out not to be a surefire way to defund Obamacare, congressional Republicans offered to play ball if only the Obama administration would delay the individual mandate. Meanwhile, HealthCare.gov was sucking it up for hundreds of thousands of American voters, in a corner of the American consciousness that got almost no coverage because the news cycle was dominated by the government shutdown.

Hardline opponents of Obamacare in Congress achieved exactly the opposite of what they set out to accomplish. The shutdown gambit distracted everyone at exactly the moment of the Affordable Care Act’s most concrete failure.

That the normally canny Republican Party would commit such a blunder shows just how much their opposition to Obamacare has become divorced from reality. At the same Ted Cruz was saying that Obamacare was wreaking “enormous harm” on the economy and costing millions of Americans their jobs—statements he made with no concrete evidence whatsoever—actual Obamacare was experiencing an enormous failure and costing hundreds of thousands of Americans wasted login attempts. Upon the rollout of HealthCare.gov, the GOP was too busy tilting at windmills to see the actual giant.

Mostly, that hurt the Republican Party. They spent the month collapsing around a single issue, at enormous political cost, and yet failed to make progress on that issue at their most auspicious moment.

It also hurt us, though. The Obama administration should be held accountable for the avoidable, predicted and spectacular failure of HealthCare.gov, if only so they fix it faster. At a moment when Republicans are smashed in the polls and the worst has passed with barely a mention in the national press, that isn’t likely to happen.

Incompetent politics breeds incompetent government, at least in this case. The extremely petty side of me is glad to see House Republican’ attempt at extorting the rest of government fail so spectacularly, but it’s probably not good for America. If I’m going to see the GOP’s indictment of imaginary Obamacare refuted so sternly, I would rather not see real Obamacare fail in the bargain.