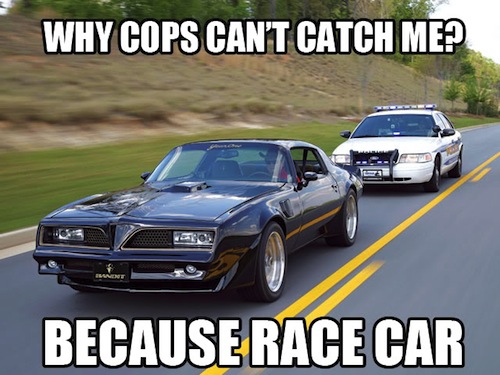 The meme above originated in a 2011 Craigslist ad and stands as a seminal example of the “because [noun]” construction, called “because as a preposition” in this edition of Grammar Girl. First of all, Grammar Girl is a 50 year-old man who created the persona as a way to meet teenage grammar nerds online. Second, there are no teenage grammar nerds online. As an adult nerd, my contact with human youth culture comes exclusively from World of Warcraft, where “because [noun]” is far more common than the standard usage. In the recently-invented informal written English, at least, “because [noun]” is here to stay. The salient question is, how should we feel about this development? Because criticism blog.

Grammar Girl traces the earliest prominent usage of “because [noun]” to a Deep Thought by our beloved Jack Handey, circa 1987. To wit:

If you ever fall off the Sears Tower, just go real limp, because maybe you’ll look like a dummy and people will try to catch you because, hey, free dummy.

In this case, the interjection “hey” functions in the same way as an em dash, joining two parts of a sentence that would otherwise be grammatically incompatible. “Hey” smooths the jarring transition between “because” and “free dummy” by breaking the flow of the sentence, allowing our brains to forget the regular relationships among words, and by moving us into the territory of informal or spoken English.

The construction is much funnier than “because they will think your falling body is a free dummy,” probably because it invites the audience to discover the relationship between “falling limply” and “free dummy” themselves. By extension of the same reasoning, though, it’s funnier without the “hey.” “Because free dummy” is that much more disorientating, and so the snap into sense-making that creates humor under the incongruity theory is sharper.

“Because” with no “hey” is also funnier because it sounds dumber, and dumb people are hilarious. Conversely, hilarious constructions that are not funny are often dumb. Grammar Girl cites the phenomenon of people using “because [noun]” in non-humorous contexts, apparently to save time. These constructions are the basis for her contention that “because [noun]” is becoming an accepted part of the language, which I consider tenuous at best.

Among power users of English, “because [noun]” remains a device for expressing fatuousness or derision, as in the headline “Louisiana GOP Bigot Changes Mind on School Vouchers Because Muslims.” In casual usage, however, “because [noun]” often carries no such indictment.

In World of Warcraft, where successful manipulation of character stats can often significantly impact gameplay, players in chat will often urge other players to configure their equipment in a certain way “because damage” or “because stamina.” These uses are arguably ironic, in that online chat privileges irony generally, but it is more likely that people employ them to simplify or save time.

That is the kind of English usage up with which I will not put. Where “because race car” and “because Muslims” convey more humor and/or nuance than their grammatically correct counterparts, simple declarative uses of “because [noun]” merely denude the language. They shift the burden of sense-making away from the writer and to the reader, and that is definitionally uncool.

As both regular readers of this blog know, I am all for non-standard syntax when it adds meaning to a sentence. Non-humorous uses of “because [noun]” fail that test. Rather than enrich the meaning of an accepted construction, they merely strip away supporting material. It’s like saying “I go store” instead of “I’m going to the store.” The first version is arguably kind of funny, but mostly it strips the language of nuance and precision. Talking like a caveman starts as comedy and ends as caveman.

So the ostensible acceptance of “because [noun]” seems to bear out Nietzsche’s contention that a great idea in the hands of common people will inevitably become common. Fortunately, it’s not really happening. Kids type in all kinds of stupid and denuded ways on the internet, because typing is a drag. There’s little evidence to suggest that people are using “because [noun]” in conversation or more formal written contexts. Probably, Grammar Girl overstates the growing popularity of the construction because trend piece.