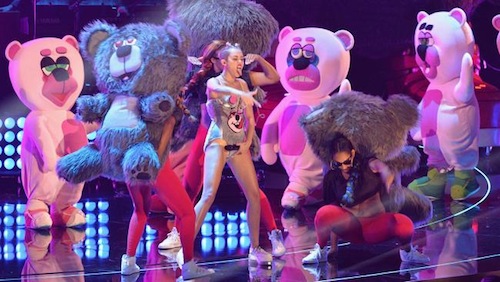 Let us assume that Miley Cyrus did what she did at the Video Music Awards on purpose. Certainly, she put on a one-piece swimsuit and danced with enormous teddy bears while slapping her previously unacknowledged vagina on purpose. But let us assume that she was purposeful in the effect she created, too. Specifically, let us not proceed from the assumption that she tried to do something really sexy and failed. Instead, I propose we take it as a premise that Miley Cyrus did not believe twerking teddy bears would be unequivocally hot, nor did she think sticking her tongue out as far as possible would be a sublimely coquettish gesture. I propose that we assume artistic intent, and think about her VMA performance as if she wanted it to be really weird.

Granted, that is by no means a safe assumption. Miley Cyrus may not be a sophisticate. For most of her life, she has been shielded from the world’s harsh realities by Billy Ray Cyrus. She’s working with a photocopy of a mimeograph, so to speak. But for the purposes of this discussion, I think we should eliminate the possibility that she was trying to do something really, mind-blowingly sexy when she conceived and executed this:

Say what you will about M. Cyrus—she has a lot of experience singing and dancing in front of crowds. Even people who sing “Party in the USA” at karaoke a few times get to know what works. I find it unlikely that Cyrus would expect whacking her own and Robin Thicke’s pubic areas with a giant foam finger to send us into spasms of uncritical ecstasy.  What, then, was she trying to do? Three explanations leap to mind:

Item (2) is, of course, the most appealing. M. Cyrus recently turned 21, and I envision a situation in which she gains access to her own fortune and tells B.R. Cyrus that she wants to stop the ride. Billy Ray does not want to return to Craigslist as his sole source of income, and so he insists she continue. Miley puts on a teddy bear swimsuit where her boobs are the ears and makes continuing impossible.

I enjoy that scenario, but I do not think it’s plausible. You might argue that explanation (1) is similarly improbable, as it demands an understanding of postmodernism that Miley Cyrus is not likely to wield, but here is where I point out that she  made her career doing a Disney show about a teenage girl who leads a secret life as a pop star. Levels of symbolic reality is kind of her thing.

Except what’s really her thing is being a child. A lot of people have compared what Cyrus did at the VMAs to what Britney Spears did several years ago, but the analogy is not so apt as it first seems. Sure, both were child stars, but Spears’s career as a Mouseketeer was not so dear as the Hannah Montana years. Cyrus reached her peak fame when she still identified as a child. Spears broke big with Baby One More Time in 1999, when she was 18. She dressed as a schoolgirl, but it was the sexualized midriff and plaid skirt kind of schoolgirl.

Also, her bad-girl VMA performance was Madonna-style glamour sexy, whereas our premise holds that Cyrus’s performance was deliberately cartoonish and off-putting. Here we come to explanation (3): that what Miley Cyrus did Sunday night was not meant to turn us on but rather to weird us out.

She certainly succeeded in capturing the media’s attention. Say “Miley Cyrus” to a crappy VH1 comedian tomorrow, and he will likely talk about the VMAs instead of Hannah Montana. Maybe that’s what she wanted, more than she wanted to impress us with how great she is. Miley Cyrus already did that when she was like 12. Maybe now she wants us to see how she can be someone else.