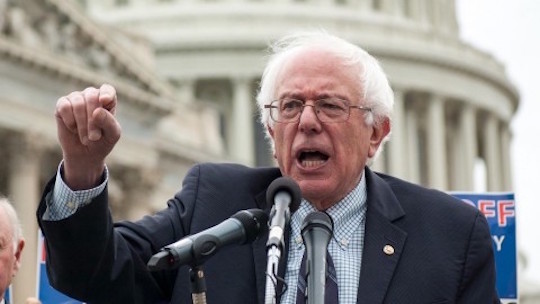 Over the weekend, I read this essay in the Atlantic titled Here Comes the Berniebro, which suggests Bernie Sanders supporters are a type by adding the word “bro” to them. Just look at how the Berniebro behaves:

The Berniebro is posting a video on his Facebook wall: You really have to watch this. Bernie Sanders says things that no other candidate would ever consider. These are real policy proposals that just might change the country.

The Berniebro asks what you thought of the first Democratic debate, then interrupts to say that you shouldn’t confuse Clinton’s soundbites for actual substance. By the way, the Berniebro adds, he was really impressed with Bernie.

That fucking bro. That these are pretty normal and unobjectionable behaviors1 for the supporters of a political candidate doesn’t really matter, because the Berniebro is clearly a bro. It’s right in the name of the kind of person he is. It occurred to me after I read this straw man essay that “bro” is the new “hipster”: it means “someone who is not you or me.”

I had a whole blog planned2 about the fashionable rhetorical practice of othering someone like you by making them into a type. It’s fiendishly effective, because they’re a category, while you and the reader are individuals. But Sam Kriss beat me to it with this weird, pleasing Portrait of the Person-Guy. You should read it. It’s probably just as well Kriss executed this idea before I could, because I have one million things to do before the Combat! blog offices temporarily relocate to Stubble’s historic New York futon tomorrow. If I can throw up there, I’ll throw up everywhere, as the song says.