Between the NSA and browser cookies, someone is recording basically everything you do. Sure, it’s only a computer, and it’s only using your information to serve more relevant page ads/incinerate terrorists. And it’s only recording you when you use your phone, or when you leave location services on and walk around, so really you have nothing to worry about. But that’s the surveillance you know, and you were never supposed to know about it anyway. Today is Friday, and there are more things in Palo Alto and Fort Meade than are dreamt of in your paranoia. Won’t you let speculation run wild with me?

First, the good news: 158 patriotic families have provided half the funding for candidates currently seeking the presidency. The bad news is there are more than twice that many families total in the United States—way more like 120 million households’ worth. If you accept that money is speech, as all of us do now except for Kim Davis, it’s kind of alarming that one in a million American households  accounts for the majority of discourse so far in this election. They overwhelmingly favor Republican candidates, and a plurality of them made their money in energy and finance. That’s not oligarchy, though, because many of us are still allowed to vote.

It’s not like concentrated financial support from a gross of billionaires could manipulate public opinion, though. Repeat that to yourself while you look at this collage of images from the Democratic debate: 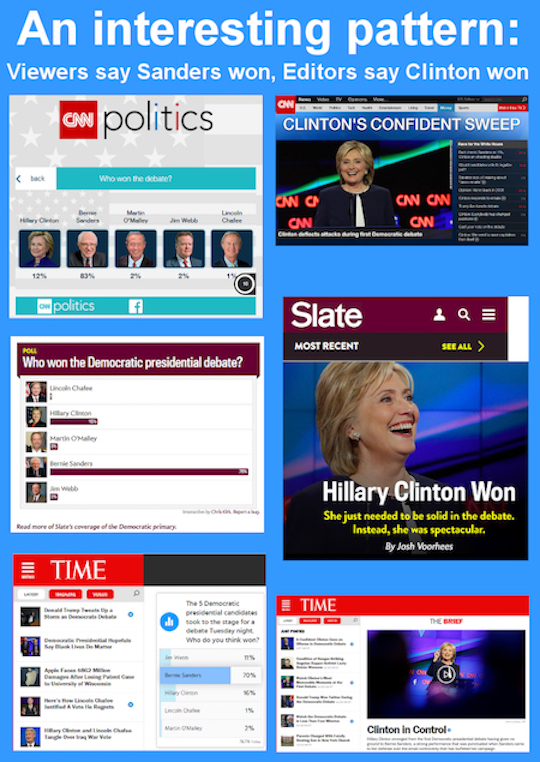 That’s an insane margin for Sanders in those online polls. The nation’s funniest socialist1 also won with several focus groups, but pundits almost unanimously agree Clinton won the debate. Even Dick Morris—a Republican strategist who is by no means an unbiased source, given his decades long animosity toward the Clintons—thinks Sanders won. Over at the New York Er, John Cassidy wonders if pundits got it wrong. His conclusion is that online polls are too easily gamed, and Sanders supporters are more likely to use the internet. Hillary won! She does not plan to break up big banks.

Personally, I don’t care who becomes president, as long as he or she keeps killing terrorists with flying robots. By “terrorists,” I mean people located near people who are or know terrorists. The Intercept has released a long, graphics-heavy, and fascinating report on the practice of assassination by drone, much of it based on classified documents given to them by an anonymous whistle-blower. That’s treason, bro. You’re empowering America’s enemies when you tell voters what their government is doing. I urge you to read that whole article, but if you don’t, I urge you to remember this startling fact: approximately 90% of the people killed in drone strikes were not the intended targets.

But when you’re flying an armed robot around the Middle East, you’re not trying to kill somebody so much as kill anybody. It’s the pick-up artist’s approach to warfare: what you do is more important than whom you’re doing it to. Ten years ago, Neil Strauss published the fascinating, infuriating and surprisingly touching nonfiction book The Game. Since then, he seems to have continued the disillusionment with pickup artistry he felt in the third act of that story, and now he’s back with The Truth. Spoiler alert: the truth is that children and monogamy are what he wanted all along. Second spoiler alert: people love that. Kathy Gilsinan sure does, at least in this interview for The Atlantic. She’s particularly impressed when he blames his former problematic attitudes toward women on his mother, which seems like dubious progress. But I’m making it sound worse than it is. I like Strauss, and the popular conception of The Game as a manual for hypnotizing chicks is the report of people who didn’t read it. The moment of his celebration does coincide with his embracing what most people do, though.