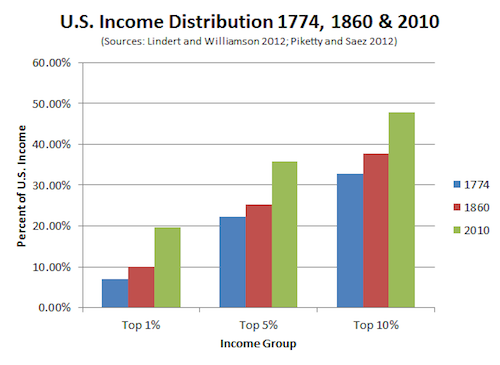 If only there were some way to make this graph that did not put percentages on both axes. That would be class warfare, though. You’re looking at a visual representation of historical US income inequality that is A) extremely conjectural in red and blue, and B) terrifying. It’s from this article in the Atlantic, which tentatively alleges that ours is a less equal America than it was on the eve of the Revolution and the Civil War. Numerous qualifications after the jump.

First of all, Jordan Weissman wants to make it absolutely clear that he is not saying slavery was okay. Just because the wealthiest 1% of Americans control almost twice the share of national income than they did in 1860 does not mean the antebellum period was more equal. Please do not destroy Jordan Weissman, secondary commenting industry. Also, pretty much all the numbers from 1774 and 1860 are made up. They’re based on historical analysis, incomplete tax rolls, weirdo censuses that probably involved some incentive to lie, and other manner of guesswork.

Still, the guess is a little unsettling. In terms of our old friend the Gini Index, 2012 America is less economically equal than the colonies and more like the 1770s England against which our forefathers rebelled. Re: socioeconomic causes of destabilization and eventual revolution, the Tea Party is more right than they know. They’re just Tories.

Of course, virtually every American enjoys a much, much higher standard of living than our revolutionary counterparts. Nobody really dies of blood poisoning anymore, to name one example. One reason for the steadily widening gap between the very wealthy and the middle class over the last 200 years is the industrial revolution. Until the second half of the 19th century, America was a nation of farmers and craftspeople. A successful farmer is richer than his hired hand, but a successful factory owner is way richer than his line workers.

Again, though, everybody in that 19th century factory is materially better off than the jerks on that 18th-century farm, just as everyone in the sad telemarketing office where you used to work is better off than the fingerless orphans in the factory. A rising tide lifts all boats, as the saying goes. The saying is bullshit, though, because unlike a rising tide, economic development by no means lifts all boats equally.

The proof is in the pudding—particularly in the changes in the amount of pudding the very rich can buy as it goes from blood to figgy to Jell-O. As Weissman notes, the Constitution laid out by the founders was designed to govern a nation where differences in material resources were much smaller than they are today.

The First Amendment, for example, was drafted at a time when the maximum speech difference between the richest and poorest citizens of Boston came down to owns printing press/does not own printing press. The notion that Sheldon Adelson might be able to buy more TV advertisements for a presidential candidate than 1,000 middle-income Americans combined was foreign to the framers, because A) what the fuck is a TV? is that some kind of strumpet? and B) the gap between rich and poor was smaller then.

Let us not take this argument too far. Historical evidence suggests that the founders did not want to create an equal society; they wanted a fair system, and a fair system allows people to press their advantages. That being said, modern advantages of money are both much greater than what the first Americans could have imagined and more powerful.

For the same reason that there’s a lot more money now than there was then, modern money also does a lot more stuff. It can buy instantaneous national communication. It can buy a gun that shoots multiple rounds per second, and those rounds are not just chunks of lead that swerve around like a damn screwball. And while money becomes physically more powerful as technology increases, it becomes more powerful socially when inequality goes up. Men who are richer than their fellow men employ them. Men who are much, much richer than their fellow men employ a lot of them.

The growth of an industrial economy is an amplification, in other words, whereas the growth of inequality can become a distortion. As we rightly venerate the Constitution, it’s also worth it to consider the shape of the society that the framers were framing. Maybe they did not restrict spending on elections, for example, because the ratio of votes to money was more even then. Maybe as the material difference between individuals expands, the difference between liberty and equality gets bigger, too. In 1776, our forefathers fought a revolutionary war against England. In 2012, we might be a little more like that England than they could have imagined.