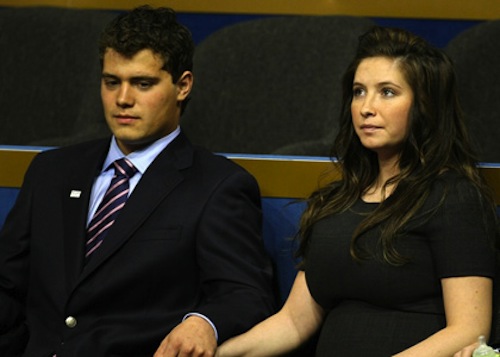 Believe it or not, I actually agree with Sarah Palin about some things. For example, we both think that the media contributes to a climate of incivility in our political discourse. We both enjoy salmon. We both make our living by producing as many words as possible on short notice. And, most importantly, we both believe in American exceptionalism. The United States is the first country built around an idea rather than an ethnic group. As a corollary to that idea, we are one of the few nations without a hereditary aristocracy. That’s why I was extremely chagrined to see this article, in which Bristol Palin announces her intention to run for public office “somewhere down the road.” Props to the nameless Combat! reader*

who sent me the link via Sarah Aswell.

As near as I can assemble it, here is the list of Bristol Palin’s qualifications for office:

1) She was briefly the governor’s daughter.

2) She did not get an abortion.

3) She was a runner-up on Dancing With the Stars, despite being neither a dancer nor a star.

Fortunately, dancing ability is not how we determine who gets to operate our various governments, or else we would have to hold a run-off between Bristol and the doll that one guy in Grand Central station straps to himself before doing the merengue for quarters. You know how else we don’t select our government? By bloodline. Despite the occasional Rockefeller or Kennedy, we do not believe in the expression of Divine Right through the breedings of our legislative class. This isn’t 13th-century Europe or, um, the 20th-century Philippines. This is America, dammit.

Or it was. In the last ten years, we’ve seen the first President who was the son of a previous President, the first significant candidate who was married to a previous President, and a smattering of congressmen’s kids elected to Congress. I submit that those are bad signs. The House of Representatives is not the Household of Representatives. Acts of Congress should not be determined by acts of congress. I could keep doing these, but instead I’ll leave you with this chilling quote from BP herself, regarding her mother’s suitability for the White House:

I think she would be a wonderful president, and I still think that she should run. She’s just so common-sense conservative, just, ‘Here’s what we’ve gotta do and this is how we’re gonna do it,’ and she brings a whole ‘nother aspect to politics because she’s a mom, because she runs a household, and I just think she’s really smart.

As anyone will tell you, the difficulties of the presidency are nothing compared to the challenges of running a household. “Anyone,” in this context, means “any smug idiot.” I learned it from watching you, dad.