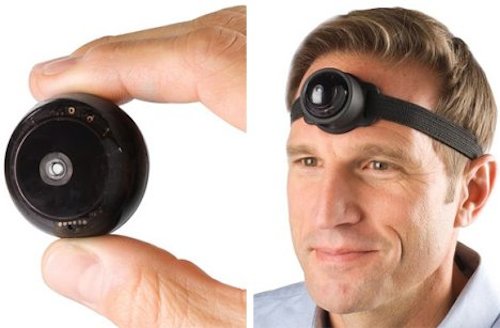 The original idea for glasses camera was a tiny camera in your eyeglasses—either embedded in a pair we send you or mounted on the head of a nail that you can drive into your existing glasses at home. Obviously, Glasses Camera Corporation is not responsible if you fuck that up. We had to explain that to a lot of people. Anyway, the camera sends information to your phone via blue tube, and the phone makes that information into a picture just like it does with its own camera. Glasses camera lets you take photos or video of whatever you’re looking at, just by touching your glasses.

You can also take the picture by pressing a button on your phone, but do not look at your phone while you are wearing Glasses Camera. I cannot emphasize that enough. Legally, though, I must mention it whenever I discuss Glasses Camera in public.

When I first invented Glasses Camera, everyone said the same thing: “When did you get glasses?” After my invention caught on, though, they changed their tune.

“Why are you always touching your glasses?” they said.

It’s amazing how observant people can be—even people without Glasses Camera. Especially those people. My coworkers quickly noticed that I would touch my glasses whenever someone used a rolling chair to change a light bulb, or when they were about to open a soda I brought them, or when they stood in front of the monkey cage at the zoo. It got so if I touched my glasses without thinking about it, to push them up or whatever, people would get scared and duck.

Fortunately, by that time blue tube technology had advanced a lot. Glasses camera stopped being glasses at all. It was just a camera with an adhesive back that you stuck to your head, ideally right between your eyes. You took the picture by pressing a button on your phone. It was a big improvement. People don’t dive for cover when they notice you have your hand in your pocket.

Glasses Camera Pro was an immediate success in India, which is how we all learned how crazy it is to ride a bike there. It also caught on in the electronic dance music community, which was open to people adhering things to their heads. But outside those niches, success eluded Glasses Camera Pro. As our sales guy put it, early adopters experienced interpersonal outcomes that worked against viral marketing.

One of our developers, Carol, ran into this problem right away. We hired her to figure out the blue tube stuff, and she got one of the first red-dot Glasses Camera Pros we shipped to India. She wore it to a dinner party.

“You got contacts!” her hostess said. She was Carol’s brother’s girlfriend, and she did this thing with her hands that drove Carol crazy. Carol couldn’t describe it, so she wanted a video to show us at the office.

“And you got married in India,” the hostess’s friend said. Carol couldn’t tell if she was being sarcastic or what. She often had a hard time telling that.

“The dot isn’t just for married people,” she said. “It’s for women generally.”

“I’m pretty sure they get dots when they get married,” the friend said. She smiled, which was weird because Carol didn’t think she should be happy.

“I thought it was virgins,” Carol’s brother said.

“That’s not the issue,” their hostess said, doing the thing with her hands. “The issue is why are you wearing it?”

Her brother got upset for some reason. When Carol explained that she was not wearing a bindi, which is what that dot is called, but rather a camera to record the dinner party, everyone else got upset, too. The long and the short of it was they made her take it off, even after she had turned it off. Later, though, the hostess and her friend asked if they could order their own, so net plus for Glasses Camera Corporation.

It looks exactly like Glasses Camera Pro, so your friends won’t even know you’re jamming them until they check their phones later. Avoid those awkward conversations, as Carol should have done!