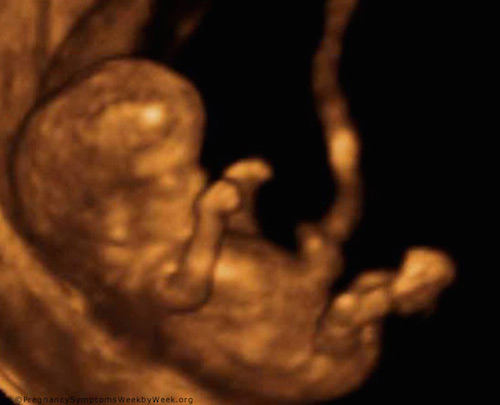 Ultrasound image of a fetus during the 12th week of pregnancy

Ravalli County has charged a pregnant woman with criminal endangerment of her unborn child after she failed a drug test. Casey Gloria Allen, 21, tested positive for THC, opiates and benzodiazapines—an active ingredient in prescription anti-anxiety medications—in a urine test administered August 26, when she was 12 weeks pregnant. Allen has been charged with a felony “for criminal endangerment over concerns about her unborn child.” Props to the Missoulian’s Perry Backus for that phrase, which A) refers to a fetus as a child a full 10 weeks before it can be legally aborted in the state of Montana, and B) disembodies the word “concern.” Who is concerned about Allen’s child, exactly? Whoever it is, they care so much about a person who hasn’t been born yet that they want to put his mother in jail.

I shouldn’t have used “his” in that sentence, since the gender of a fetus can’t really be determined at 12 weeks. But this story involves a lot of things that people cannot or should not know. For example, how did the court learn that Allen was pregnant?

Missoula activists Lynsey Bourke and Emily Likins ask that question in a press release. It’s one the Missoulian declines to investigate. Instead, we get this statement about broads from Ravalli County Deputy Attorney Thorin Geist:

The reality for some of these women is the need for drugs is stronger than any maternal instinct they have.

Can you imagine the sick priorities of a woman who would rather take drugs than become a mother? In its zeal to protect the rights of a hypothetical person, Ravalli County might want to be careful about punishing Allen. The effects of THC on a first-trimester fetus have not been conclusively determined. But one agreed-on predictor of childhood success is having a mother who is not in jail.

In a lot of situations, Allen could plead down her felony possession and obstruction charges to misdemeanors and avoid prison time. The addition of a third felony charge of criminal endangerment substantially increases the likelihood that her baby will be born while she is incarcerated. It also increases to $100,000 the bond for a woman who has committed no violent crimes. From a criminal justice standpoint, the thing that makes Allen more dangerous than other small-time drug addicts is that she is pregnant.

The practice of applying endangerment statutes to fetuses was supposed to protect pregnant women, but Ravalli County’s approach perverts that original intent. Prosecutors first invoked child endangerment laws to punish people whose reckless behavior harmed other people’s fetuses—for example, people who cause car accidents that lead to miscarriages. But fetal endangerment charges have become a stalking horse for anti-abortion activists, who seek to protect the unborn by prosecuting their mothers.

There are a lot of philosophical and legal problems with that approach, not the least of which is that it makes women—and only women—eligible for a whole class of new crimes. But in this situation, I’m more concerned with outcomes. If Ravalli is prosecuting Allen in order to protect her unborn child, how will the county’s actions materially improve that child’s life?

The same county government that’s prosecuting Allen shut down Ravalli’s only reproductive services clinic by refusing Title X funding last year. Its pursuit of this case will only worsen health outcomes for women in the county. Now that pregnant women who use recreational drugs know they can catch a felony for visiting their doctors, fewer people are going to seek prenatal care.

And let’s be absolutely clear about something: women who smoke pot get pregnant, too. If we’re so keen on upholding the rights of unborn children, maybe we shouldn’t make their mothers specifically eligible for more severe punishments.

There’s plenty wrong with making pregnant women more vulnerable to criminal charges than men who break the same laws—wrong ethically, wrong constitutionally, and wrong philosophically. But reasonable people disagree about jurisprudence and ethics. What we can agree on is outcomes.

If we all want to ensure better lives for kids who haven’t been born yet—as I do, and as the Ravalli County courts purport to do—then we need to be honest about what harms them most. THC during the first trimester is probably bad for baby. But putting a third felony charge on his mother and substantially increasing the risk that he will be born to a woman in jail—a woman who is prevented by the state from raising him, from even holding him—is surely worse.