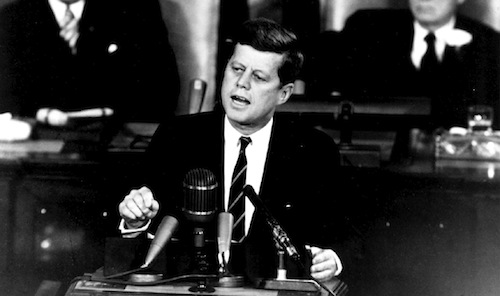 Here’s Santorum on ABC’s This Week:

What kind of country do we live in that says only people of nonfaith can come into the public square and make their case? That makes me throw up. I don’t believe in an America where the separation of church and state is absolute.

As any schoolchild will tell you, the First Amendment to the Constitution clearly states that no one who professes any sort of religious faith is allowed to participate in politics. That’s why the last seventeen presidents were atheists. Here Santorum makes use of some rhetorical sleight-of-hand: he conflates religion and religious people. Like the cynical argument that requiring health insurance companies to cover contraception violates religious freedom, Santorum is substituting for the separation of church and state the separation of belief and politics.

Back in high school, those of us who had no hope of learning what a boob felt like and therefore had nothing else to think about in English class learned some basic principles of debate. One of them was that you can’t argue values. Logic is an internally coherent system, and two people who start from agreed-upon values should therefore be able to convince each other, but belief is arbitrary. If we both agree that, say, individuals can exclusively possess delimited areas of land, we will get somewhere in our treaty negotiation, but if one of us thinks the very concept is absurd, there’s going to be a war. Shared values make the difference between politics—American politics, at least—and simple power struggle.

It’s important to note that in a liberal democracy, nobody cares where those values come from. Our beliefs aren’t always going to line up, but if I believe that stealing is wrong because it wrecks society and you believe it’s wrong because God said so, the difference for purpose of argumentation is nil. We’re not arguing about what our values are; we’re arguing about what follows from them. The sources of our beliefs lie in the other direction.

When Rick Santorum complains that the absolute separation of church and state prevents people of faith from participating in politics, he’s really complaining that politics does not take all of its values from faith. If it did, we wouldn’t have to convince each other of stuff—we would just believe stuff. Catholics*

believe that God forbids people from using condoms. Non-Catholics harbor no such belief, so if you’re going to convince me that condoms should be illegal, you’re going to have to appeal to one of my actual values.

Santorum’s assertion that the separation of church and state makes him throw up is therefore a declaration that having to convince people makes him throw up. His values are dictated by his religious beliefs, so why don’t people submit to the authority of God and agree with him? Of course, for those of us who do not believe that the Humanae Vitae expresses the opinions of the all-powerful creator of the universe, this authority-of-God argument holds no water at all. Hence Santorum’s profound frustration.

Which brings us to the sixty-dollar question: why would such a man, who finds our system of politics literally disgusting, run for president? It is a corollary to the question people asked of Kennedy in 1960: what happens if someone whose beliefs are A) arbitrary to us and B) absolutely authoritative to him becomes the most powerful person in the world? For Kennedy, the answer was that he would respect the American people’s need to be convinced. For Santorum, the answer is that our disobedience makes him want to puke.