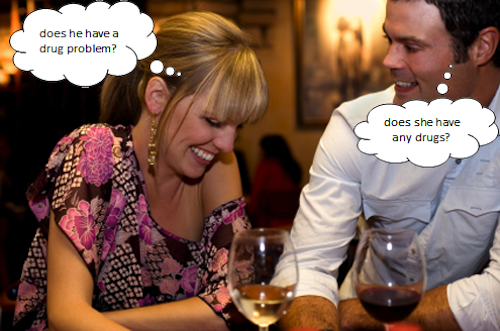 Contemporary interpersonal organization puts me in a difficult position: I hate myself, and yet I want to associate primarily with people who are like me. We all want to expand our social circles, if for no other reason than to increase our access to donor kidneys, but you can’t go around with just anyone. Most people are assholes, and going to a party or joining some community organization is like reaching into a bag containing one licorice whip and 23 garter snakes. Sure, you keep putting things in your mouth

, but you also keep wishing you hadn’t.* And yet the occasional gem leads us to persist, even though most people are compatible like a goldfish and a hairbrush. But there’s an upside: you usually find out pretty quick. This week’s link roundup features indicators of compatibility from the subtle to the overt to the viscerally repulsive. It’s a glimpse of the stage machinery behind getting along, or at least a reminder of how bafflingly unrelatable so many people are. It’s Friday, the weekend is upon us, and the world is full of strangers eager to make and then alienate our acquaintance. Welcome, new friends, and hello strangely familiar assholes.

First of all, if you are not reading the Ok Cupid blog, you should start doing so immediately. Stop reading this one if that’s what it takes to make time for articles like this statistical breakdown of correlations between the answers to questions it’s okay to ask on a first date and information you really want to know. For example, the answer to “Would you consider having sex with someone on the first date?” correlates to “Do you like the taste of beer?” more strongly than any other single question. Good predictors of long-term compatibility, on the other hand, include “Do you like horror movies?” and “Have you ever traveled around another country alone?” Thirty-two percent of successful couples who met via Ok Cupid agree on both of those, which makes for over three times the rate of normal coincidence. Also, writing proficiency correlates extremely well with religious commitment—inversely.

Go ahead—add “of course” to that last sentence. It’s your willingness to indulge in such generalized prejudices that makes you compatible with the Sons of Confederate Veterans in Mississippi, who have proposed a license plate commemorating  Civil War general and early Ku Klux Klan leader Nathan Bedford Forrest. The reaction from state NAACP president Derrick Johnson, who was apparently not aware of the plates until he was contacted by reporters, is priceless. “Seriously?” Johnson said. “Wow.” Although Forrest personally led the massacre of black Union troops at Fort Pillow in 1864, his defenders argue that the former Grand Wizard was not fundamentally a genocidal bigot, because he left the Klan before he died. They are not racists at all, either; they just want to raise money for the annual SCV restoration of historic Confederate flags. That’s how committed they still are to, um, state’s rights.

Of course, not everyone in Mississippi is a racially motivated kidnapper/torturer. Oh, wait—I meant to type, “not every racially motivated kidnapper/torturer is in Mississippi.” Some of them are in supervisory positions in the CIA, as this terrifying Associated Press exposé indicates. Remember a few years ago, when we nearly got ourselves dragged into the Hague by kidnapping German citizen Khaled el-Masri, taking him to a secret Afghan prison, and torturing the living shit out of him because we had mistaken him for a high-ranking member of Al-Qaeda? Seven years later, the analyst who masterminded that one is now helping to run the CIA Counterterrorism Center. If mistaking an innocent man for a well-known terrorist and having him sodomized in an underground bunker before apologizing and giving him back to Germany isn’t considered a screwup in that organization, one has to ask what is. I’m beginning to think the Central Intelligence Agency is not totally committed to individual rights and accountability.

They are still less viscerally repellant than everyone who appears onscreen in this video, though:

Props to Willy for the link. “You know, there’s no place like home,” Michael Correa says. “Especially someone else’s.” See, right there in the first seven seconds, we are already in the realm of total disagreement. The producers of PowerHouse—I assume a coalition of vampires led by Frank Luntz—are clearly people who do not invest a lot of importance in the strict “meaning” of the English “words” they “say.” They’re more interested in the non-linguistic aspects of the human experience, specifically the experience of seeing the lobbyist owner of a 14,000 square-foot mansion wrap gifts in sheets of US currency. Seriously, the sound when she cuts it is terrifying. Don’t worry, though—she’s not spending all her time cutting dollar bills in half so she can wrap them around Tiffany pens she gives to lawmakers. She’s also working tirelessly to make sure the American people aren’t paying a half cent apiece to pay for abortions for teenage incest victims. So really she’s saving money.