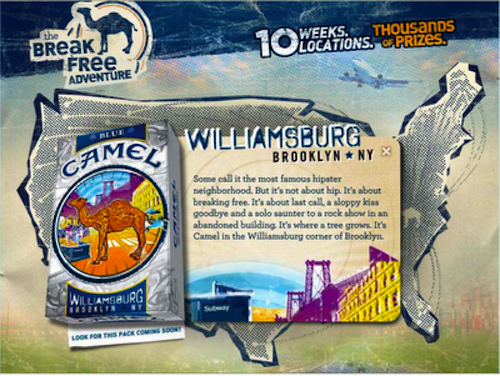 Promotional material for Camel's new Williamsburg-themed cigarettes. No word yet on dogs and cats living together.

In what is surely the third most infuriating development of the last year, the RJ Reynolds tobacco company has begun marketing a brand of Camels to Williamsburg hipsters. The packs are being sold as part of a national campaign associating Camel Blues—née Camel Lights—with Austin, the Haight, and other ostensibly hip American locales, and feature everyone’s favorite cigarette-smoking horse in front of the Williamsburg Bridge, a New York subway stop and the facade of what appears to be a SoHo warehouse. The second most infuriating development of this year is this lead from the Observer article: “You’re just another rebellion-minded young kid with ambitions to be like one of those people you associate yourself with. That’s correct, you want to be a hipster.” I defy you to comprehend that sentence on the first try. The most infuriating development of the year is that people are actually buying these things. Once again, the concept of the hipster rears its two, bickering heads: one a risible and obvious construction designed to sell cigarettes, blog posts and copies of New York magazine, the other a phenomenon that is evidently real, if only a real illusion.*

“It’s about last call, a sloppy kiss goodbye and a solo saunter to a rock show in an abandoned building,” says the promo copy for Camel Blue Williamsburg. “It’s where a tree grows.” Of course, there are no abandoned buildings in Williamsburg, and the rock shows generally do not start at 4am, but that probably looks better on the back of a pack of cigarettes than “it’s about a mechanical handjob in the bathroom at Union Pool and then throwing up because you did too much coke.” As you can see, there’s a considerable amount of mythmaking here. What makes this and other manifestations of the hipster meme so difficult to parse is that the baldfaced lying of cigarette marketers is not so different from the slightly more bearded lying of the press.

Consider Aaron Short’s lead in The Brooklyn Paper: “Williamsburg’s hipsters have been smoking for decades — but Joe Camel wants them to start puffing their own neighborhood brand.” Actually, Williamsburg hipsters have been Hassidic Jews for decades. The neighborhood was condemned garages and dudes in furry hats until the very late nineties, when it briefly became an artist’s neighborhood (whatever that means; I think it involves welding) before turning into the affluent youth enclave it is today. Yet, much like the mimetic concept of hip itself, its amorphous character has taken on solidity and permanence in our collective cultural consciousness.

The awareness that “hipster” is more real as a concept than as a people or a geographic location makes it difficult to assess the news that “Bodega owners…on Bedford and Manhattan Avenues say they sell out of ‘Williamsburgs’ the day they come in, and customers sometimes buy every pack available.” First of all, New York is still the place where you can say “give me 300 packs of cigarettes” and the dude at the corner store will ask no questions beyond “you want bag?” Second, there is a frustrating array of possible reasons why this is happening:

A) Hipsters are buying them ironically. The central proposition of hipsterism, to my mind, is that consumption can be a means of personal expression. Up to a certain level—Animal Collective albums, poppers—the commodities consumed are consumed sincerely, as they were intended. Once you get above an ill-defined threshold of mainstream marketing, though—Duran Duran, virtually all articles of clothing—consumption becomes ironic. If you are going to a party in Williamsburg, a pack of Williamsburg cigarettes is going to be one hell of a conversation piece, and the conversation will start with “look how stupid these are.”

B) Not everyone in Williamsburg is a goddamn hipster, all right? The Williamsburg resident who told The Observer that he buys Camel Williamsburgs whenever he sees them is Abdo Hussein, “a worker at a deli in Greenpoint.” While I maintain that an exclusionary white cultural identity is a principal element of hipsterism, this claim is controversial; what is not controversial is that hipsters don’t work at delis. Sandwich shops, maybe, but they are not the kind of sandwich shops where people are named “Hussein.”*

C) New brands of cigarettes are always on sale. Sadly, the simplest answer is usually the correct one. As a Brooklyn neighborhood for young people where rents are as high as in much of lower Manhattan, Williamsburg is penny-wise and pound-foolish. What could be more p-w and p-f than a pack of discount cigarettes?