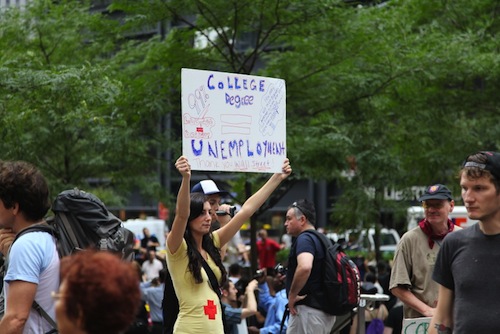 If the gap between rich and poor seemed like it was widening a bit more slowly this morning, it was probably because Occupy Wall Street is still going on. Exactly how it goes on remains a matter of conjecture, although certain non-televised journalists are beginning to pierce the veil. Michael Greenberg’s longish tour of Zuccotti Park in the New York Review of Books provides us with a slightly less vague picture of the movement than what we’ve gotten so far, including their use of “the people’s microphone.” Because city ordinances prohibit the use of amplification devices, public speakers at the OWS demonstration have their words repeated by the crowd. It’s a big ol’ objective correlative for a protest that has coalesced out of Twitter, Anonymous and maybe a few emails from the insufferable Adbusters, and now has to grapple with the problem of propagating a message when no one has been designated to speak first.

We are not Left, we are not Right. We are the 99%. We are leaderless. Just stay away. We are here to end corporate influence in government. We don’t want to be like the Tea Party which was started by Ron Paul and co-opted by the Republican theocratic Right.

As usual when someone proposes a declaration, you nod through this one right until the end, when you begin shaking your head furiously. Mission statements do not usually contain bitter, possibly false recollections of other organizations, but Occupy Wall Street does not have a usual mission. It pretty much doesn’t have a mission at all. They definitely want to stay in the park, as last week’s successful staredown with its owners indicated. Other objectives are unclear. There’s been a lot of talk about abolishing the banking system, which sounds like a great idea provided you do not think about it for even one second. Otherwise, it’s an occupation without demands.

A demand requires a demander, and OWS doesn’t have one. In this way it is a pure protest, an “outcry,” as one Greenberg interviewee put it. The other word for that is “complaint.” Complaining as a tactic has always enjoyed broad popular support, and OWS certainly does. A recent Quinnipiac poll claims that 67% of New Yorkers agree with the protestors, although what that might mean is problematic given that said protestors have made few declarative statements. In this way, they resemble the Tea Party: leaderless, objectiveless, vaguely exciting.

I am certainly not the first to make the comparison. It’s tempting to see OWS as the Tea Party’s left-wing counterpart, since it’s an ostensibly spontaneous uprising of people who hate this but can’t say what they would like better. Like the early Tea Party, Occupy Wall Street presents a show of broad support for an idea that has yet to be articulated. They’re mad as hell, and they’re going to continue being mad until you acknowledge that—possibly after. The difference is that Occupy Wall Street is mad about something that actually happened.

Wealth inequality in the United States is at a historic high. Corporate profits are at an all-time high and average CEO compensation is up 300% since 1990, yet wages have stagnated. For whatever reason you choose, things have gotten much, much better for rich people in the last 50 years. Meanwhile, ordinary people are kind of hosed. Unemployment is higher than it’s been since the Great Depression. The recession is ostensibly over, but the only people who have recovered from it are the ones who caused it.

So the richest people in America are doing great, and the Supreme Court recently decided that they can spend as much money as they want on politics. Maybe it is an accident of history, or maybe they are rigging the game in their favor. In either case, the jobs numbers, the wage figures, the bailouts and the court cases are indisputable. We are not talking about a bunch of retirees who suddenly became concerned about a federal deficit that had existed for 20 years, who woke up after the inauguration of the first black President and decided to “take our country back.” That’s a plan as garbled and stupid as “abolish the banking system” or “share everything.” But at least Occupy Wall Street is about something real. Now is a fantastic time to be rich in America. It’s one of the worst times to be middle-class—to be young, to work, to try to have some say in the direction of this country—since we invented the automobile. Complaining won’t do a damn thing about it, but at least we are beginning to complain about the right things.