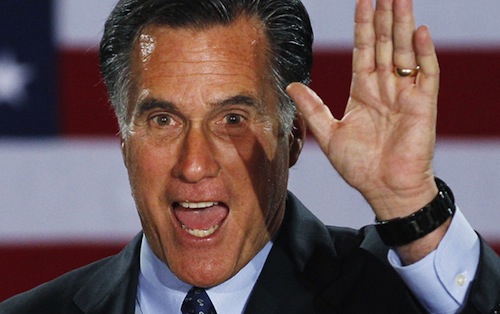 As the Mitt Rombot inches closer to becoming self-aware, pundits across the internet have turned to deciding how his “47% of Americans will never care for their lives” remarks compare to the worst gaffe in American history: Barack Obama’s 2008 “guns and religion” comment. Both statements cost the speakers their respective elections. But which is worse? Mary Bruce of ABC News put the question to Jay Carney at yesterday’s White House presser. William Saletan quotes 500 words of 2008 Obama in what is definitely not a half-assed run at his deadline. And Jamelle Bouie at the American Prospect points out that each gaffe came at a different point in the horse race. Unifying theme after the jump.

Both Obama’s and Romney’s remarks constitute serious failures of empathy. In 2008, Obama seemed unable to believe that working-class people could thoughtfully support conservative politics, dismissing their beliefs as a psychological displacement of their bitter disappointment. In May, Romney could not compass the notion of a person who worked hard and took responsibility for her family but still didn’t make enough money to pay federal income tax.

The arguments are similar, but there’s a difference in what PR writers refer to as the “call to action.” Romney says it’s his job “not to worry about those people” and urges the donors in his audience to give him a bunch of money, so the executive branch can stop worrying about them, too. Compare to Obama:

And each successive administration has said that somehow these communities are going to regenerate. And they have not. So it’s not surprising then that they get bitter, and they cling to guns or religion, or antipathy toward people who aren’t like them, or anti-immigrant sentiment, or, you know, anti-trade sentiment [as] a way to explain their frustrations…And you can go into places where you’d think that I’d be very strong, and people will just be skeptical. The important thing is that you show up and you’re doing what you’re doing.

Obama’s call to action is the diametric opposite of Romney’s. Where Romney urges his audience to ignore the 47% and give him cash, Obama urges his to keep reaching out to the guns-and-religion crowd. One of these men wants to bring those who oppose him around to his cause, and the other wants to take the country back from them.

There’s a horse-race difference, too. As several analysts have noted, Obama made his comments before he won his party’s nomination. The Obama image was still malleable, whereas September Romney is a more established figure in the public consciousness. More importantly, though, Obama’s condescending remarks contradicted the larger message of his campaign. He ran as a uniter under a big tent, whereas the Republican party has spent the last three years explaining who is and who is not a real American.

For a lot of voters, what Romney says in that fundraiser video is a more straightforward version of what he’s been saying all year. He already seemed to regard poverty as a choice that only an idiot would make. His party already seemed to regard democracy as a system for keeping villains out of government. The gaffe in Obama’s speech was one of “inartful phrasing,” to borrow a term from the other campaign. Romney’s gaffe just reads as too much candor extended by accident to too many people. For a man who has spent the last year trying to look like he’s saying what he thinks, it’s an ironic way to self-immolate.