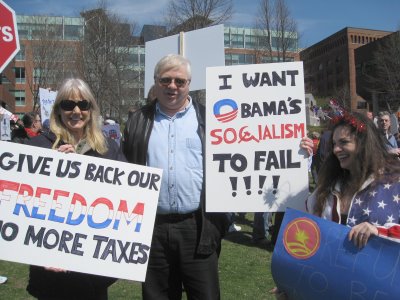 Perlstein’s thesis is that an undercurrent of populist rage runs beneath the surface of American politics in any era. News outlets and centers of governance are necessarily located in metropolitan areas, so good country people already imagine that the national discussion is biased in favor of big-city elites. Large-scale social movements tend to originate in cities, too, as do the problems that accompany population growth—overburdened public schools, endemic poverty, even environmental concerns. Meanwhile, taxes go everywhere. If you’re part of America’s broad, jiggling middle, the sense that the federal government is smugly urbane and focused on issues that don’t affect “real” people is pervasive. It can be cured by reading a newspaper, but there will always be a portion of the electorate—that guy at the end of the bar yelling about “common sense,” which nobody seems to have but him—that combines pride and ignorance to unfortunate effect.

Responsible politicians ignore these people, in part because they have bad ideas and in part because there usually aren’t enough of them to elect anybody. Occasionally, though, historical forces combine to make populist rage a useful political tool. Back in 1925, when the rural poor at least had the sense to be Democrats, the Scopes Monkey Trial crystallized a cultural resentment that had saturated America. The Roaring Twenties saw enormous economic growth, widespread migration to cities, and the social liberation that went along with it—flappers, speakeasies, jazz, unchaperoned dating and, occasionally, the extension of basic dignity to black people. Meanwhile, people in Nebraska made pie. They read reports of a world that had seemingly gone insane, and when a Tennessee biology teacher was arrested for teaching evolution, they seized on the case as a symbol of the conflict between two American values systems.

Enter Willam Jennings Bryan, The Great Commoner, whose flair for rhetoric and uncanny ability to join the wrong side of every historical debate that occurred in his lifetime had led him to lose three Presidential elections. Bryan knew a second-string zeitgeist when he saw one, and volunteered himself as an attorney for the prosecution in the Scopes Trial. His arguments focused more on whether Scopes believed in God than on whether he’d taught evolution, but Scopes was convicted anyway, and Darwin’s theory of species differentiation through natural selection was completely discredited forever. Oh, wait—Darwin’s theory remained an accepted scientific principle, since nobody gives a rat’s ass what a bunch of semi-literate church deacons think, and prohibition was repealed and urbanization continued apace, women were allowed to wear pants, and William Jennings Bryan died in his sleep. He was famous again.

There are still people who think Biblical creation should be taught in schools, and that it isn’t is just more evidence of a vast liberal-elitist conspiracy to let socialism overrun the nation. These are the Bryan Base, and they’re the same people (demographically, at least) who think Obama’s birth certificate is fake and the Senate would pass a bill creating government panels to vote on whether Sarah Palin’s kid can have medicine. Encyclopedia Brown could refute their entire political platform in five minutes, but he could never change their worldview. They don’t vote based on facts or arguments; they look at the impressions they’ve gathered and decide who’s on their team. “Socialism” is not an economic system to them. They say it at political events the same way opponents of the Mets used to chant “Dar-ryl” at Darryl Strawberry.

As Perlstein points out, the check on this force probably doesn’t come from informed, responsible citizens. It comes from politicians, whose professional and personal ethics should prevent them from harnessing the power of the loud and stupid. In the same way that you don’t win the Miss America Pageant by taking off your top, congresspeople are not supposed to block health care reform by saying there’s a forced euthanasia policy in there. Usually, that system keeps American politics from getting any dumber than it has to be. As recent events have shown, though, it doesn’t always work. In the last few weeks, many of our elected representatives have shown themselves willing to abandon the majority of their constituents in order to whip up a few briefly useful nutjobs. One is forced to question what they might do in a moment of real crisis.