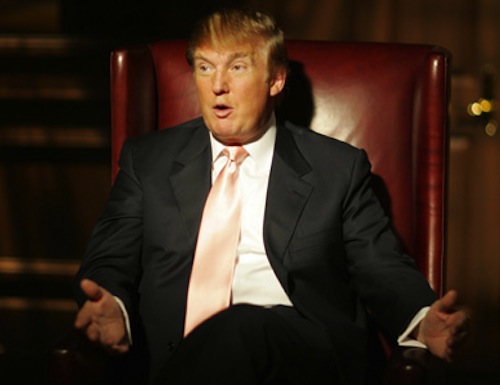 "So I'm sittin' there on the (fudging) bus and this (fudging) midget gets on, just little as (sugar,) and all of a sudden I've got the biggest (fudging) (barnyard) of my life. I don't know why."

Combat! blog’s east coast odyssey continues, with all the inattention and substance abuse that entails, so now seems like as good a time as any to keep following Donald Trump through the slipstream of American bullshit like the great white whale he is. Hot on the heels of the White House’s release of President Obama’s birth certificate, Trump has demanded to see his college transcripts. “The word is, according to what I’ve read, that he was a terrible student when he went to Occidental,” Trump said. “He then gets to Columbia; he then gets to Harvard. How do you get into Harvard if you’re not a good student? Now, maybe that’s right, or maybe it’s wrong. But I don’t know why he doesn’t release his records.” Here’s a tip for those of you still interested in behaving responsibly in a functional society: if you’ve sort of heard something, and you don’t know whether it’s right or wrong, maybe wait to call a press conference. Unless you’re afraid people might stop looking at you.

END_OF_DOCUMENT_TOKEN_TO_BE_REPLACED