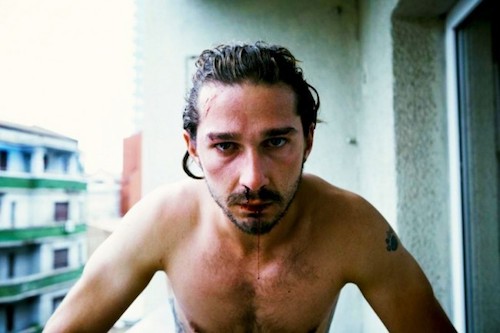 An image of Shia LaBeouf originally published in The Worst magazine, as if that means anything

It’s all our faults collectively, but Transformers made Shia LaBeouf an aristocrat. We had to see live actors be friends with computer-rendered characters from a cartoon about a toy, so now LaBeouf gets an income forever. Like many members of the leisure class, he has turned to art, producing a short film obviously plagiarized from a Daniel Clowes comic. Like many m.’s of the l.c. who get in trouble, he subsequently turned to philosophy, arguing that authorship is censorship and intellectual property is theft in a series of weird interviews that were, themselves, kind of plagiarized. He also hired a skywriter to blanket LA with a sarcastic apology to Clowes, who lives in San Francisco.

Shia LaBeouf is an asshole. He brazenly ripped off Justin M. Damiano and took an interest in the philosophy of authorship right after he got caught. He has conducted his inquiry mostly by taunting Clowes; last week, he posted a storyboard for a film called Daniel Boring that closely resembled David Boring, Clowes’s beloved graphic novel. Then he posted the cease-and-desist letter.

Such trolling is unseemly, since LaBeouf committed the initial injury. But even if he hadn’t, his attempt to recast their interaction as a dialectic struggle between authorship and art would still break the one rule of philosophical inquiry: attack up.

Because he can make a particular expression with his face, LaBeouf has much more money than Clowes. He’s rich, and he’s not bootlegging DVDs of Transformers 2: Revenge of the Fallen to mail free to his Twitter followers. An uncharitable reading of his career suggests that he hates authorship because it’s something his money can’t buy. But that is conjecture. I’m sure LaBeouf would write something just as good as David Boring if appropriation were not now authorship and genius the ability to “use information.”

The problem with LaBeouf’s attack on authorship is not that he’s mounting it against the victim of his plagiarism, or that he has profited more from copyright law than Clowes ever will. It’s that he claims to appropriate material to create art, when by all indications he’s doing it so he doesn’t have to think.

You can see this problem at work in the Bleeding Cool interview, which begins with this exchange:

Richard Johnston: Tweeting with the voice of others. Is this art?

Shia LaBeouf: What does an artist do—they just point and say look at this.

RJ: No, that’s what a critic does. I am certainly interested though.

SL: I agree with Julian Schnabel , Jeff koons, Duchamp ect……
You agree with?

In response to this question, Johnston sends an image from Scott McCloud’s Understanding Comics that eloquently advances a theory of art as jubilant expression. You have to think about it for a while to understand it, but its beauty is that anyone can.

LaBeouf does not seem to want to think about it and responds, “Cool, u stick with ur squad. I’m good with mine. Live good player.” I have substituted periods for the original line breaks. Don’t let the stupidity of the writing distract you from the infuriating sentiment: that Schnabel, Koons and Duchamp are famous artists, whereas The Beef doesn’t know who Scott McCloud is.

If LaBeouf had attempted to understand the cartoon instead of citing “his squad,” it might have refined his conception of art. But he’s too busy Googling Lawrence Lessig quotes. That’s what makes LaBeouf’s insistence on arguing about authorship and appropriation so infuriating: he himself is not following the argument.

Going on Twitter and apologizing for his plagiarism with plagiarized apology tweets may raise questions about authorship, but it also saves LaBeouf from having to write a whole apology. His defense of appropriation in the Bleeding Cool interview invoked the authority of conceptual artists, but it also kept him from having to read and comprehend a cartoon. Whatever other consequences his appropriations might have, they seem to save him from a lot of chances to improve his art.

This problem emerges tellingly in the last paragraph of his interview/prepared statement with The Worst. He says the music video he directed was influenced by the Butoh form of Japanese dance theatre, which he describes:

It typically involves playful and grotesque imagery, taboo topics, extreme or absurd environments, and is traditionally performed in white body makeup with slow hyper-controlled motion, with or without an audience. There is no set style, and it may be purely conceptual with no movement at all.

Those sentences are from the Butoh Wikipedia page—the introduction, no less. It raises a question—does LaBeouf know anything about Butoh? Did it actually influence his music video? Maybe he thought Butoh was cool enough to name check but not cool enough to learn about for possible incorporation into his work. There is a name for people who approach art that way, and it sounds worse than “critic.”