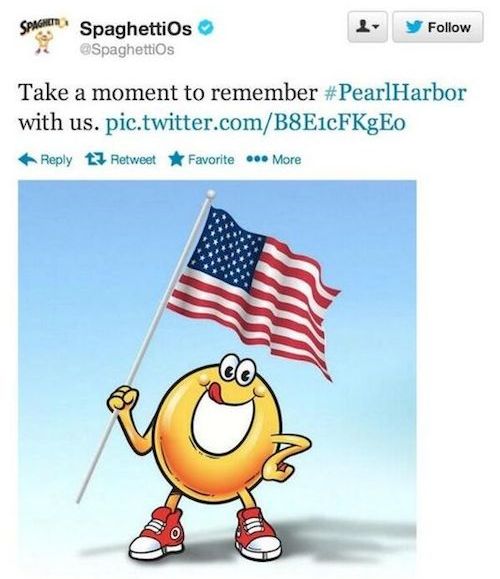 A zero we can all remember fondly

(Ed.: An earlier draft of this post contained the phrase “pubic service.” While the error persisted for some time, Combat! blog assures you that it was an error, and we would never perform such services for free.) Now that the cat video thing has died down, the internet has one fundamental purpose: to show us things we can get offended about. Our sense of righteous indignation is like our sense of beauty, however: engage it too often and we risk dulling it. It is therefore by way of public service that Combat! blog examines the recent quote-unquote controversy over SpaghettiOs’ Pearl Harbor tweet, along with the nested controversy of Natasha Leggero’s remarks thereon. There’s a lot of information out there on the internet and precious little time to get offended by all of it. Today we ask the question: Go berserk?

If you think I have exaggerated the internet’s propensity for righteous indignation, consider that SpaghettiOs apologized almost immediately for tweeting the image above. All things considered, it’s pretty tame: a cartoon pasta holds the American flag.

Twitter users complained that it was insufficient to the gravity of the occasion, which is problematic when you consider what they might have preferred. Twitter failed to rise in outcry against, say, Honda for not acknowledging the anniversary of Pearl Habor at all. Should SpaghettiOs have just kept quiet? Should they have tweeted a picture of disabled vets and left their child’s average of soup and pasta out of it?

It is debatable whether there is any way that SpaghettiOs could say “Pearl Harbor” in a context that wouldn’t offend someone, which raises the question of why SpaghettiOs felt obliged to commemorate Pearl Harbor at all. And the answer is because cynically paying lip service to veterans is what we do.

Using the power of unfalsifiable claims, I trace this phenomenon to 2003, when “support our troops” became a euphemism for “support the war in Iraq.” “Support our troops” was such an effective marketing tool that it separated from its original issue and became a sort of all-purpose political piety.

That’s why every single politician who appears on television must wear a little American flag. It’s why Ted Cruz protested the closure of the World War II veterans’ memorial during the shutdown he caused. In a more abstract sense, it’s also why thousands of veterans are homeless, broke and/or receiving inadequate medical care even though every man, woman and child in America loves them.

The United States treats its veterans the way certain people treat the prophet Mohammed: insisting they be talked about and depicted only in the most respectful terms while pursuing policies that are antithetical to their interests. It’s no coincidence that pious veneration of veterans coincides with America’s involvement in two decade-long wars of choice in Asia. We are very careful how we talk about veterans—and especially about how other people talk about veterans—so we don’t have to think about how we treat them.

Natasha Leggero made this point the centerpiece of her non-apology for her own part in the SpaghettiOs/Pearl Harbor fiasco. Apparently, Leggero is a comedian who appeared with Carson Daly on ABC’s New Year’s Eve programming last week. Pretty much every proper noun in that sentence is outside my wheelhouse, except for “New Year’s Eve,” which I spent fusing with a couch at the White Horse Inn. But there was an ABC show and Leggero was on it, and during her appearance she remarked that “it sucks that the only survivors of Pearl Harbor are being mocked by the only food they can still chew.”

Cue firestorm of indignation. How dare Leggero imply that the survivors of Pearl Harbor are now old and likely to wear dentures? The only accurate thing that can be said of veterans is that they are all heroes, every single one of them, and were it not for the current and former members of the US military no one could be free. And how dare Leggero profane their memory on national television, at the very moment when she, Jane Lynch and the former host of Total Request Live are about their sacred duty of being offended by a tweet from SpaghettiOs?

Leggero’s response points out that people who are really concerned about veterans might direct their offense at the sorry state of veterans’ services, or donate to the Disabled American Veterans foundation, as she did. But our love for veterans, like our vigilance against insufficient veneration, isn’t about helping them. It’s about defending our consciences against all enemies, foreign and domestic, from branded tweet to network television.