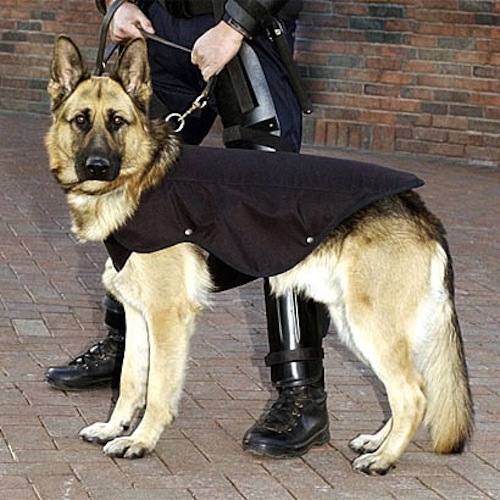 The second coolest dog ever (Number one: Phife Dawg)

In keeping with its tradition of covering the news not just as it happens, like most papers, but also possibly before it happens, the Style section of the New York Times announced today that bulletproof vests are totally hip. The author of the article, Ruth La Ferla, says the phenomenon was likely spurred by the return of the Fox show 24, in which Jack Bauer often wears a bulletproof vest. I guess that’s possibly true—24 is a show on television now, and people are apparently wearing bulletproof vests for fashion now—in the same sense that eating breakfast makes it get lighter outside. As is usually the case with a style piece, you can’t prove it’s not happening. La Ferla points out that bulletproof vests are worn by counterterrorism operatives and wealthy plutocrats, as well as Hollywood moguls and 50 Cent. “So it may have been only a matter of time,” she writes, “before aspiring hipsters embraced the style — the sartorial equivalent of a safe room — as a badge of cool.” Because as any hipster will tell you, no one is cooler than 50 Cent, unless it’s the guy who runs Wuhan Steel Group.

La Ferla’s reasoning makes no damn sense at all, but hidden in the murky soup of tangled causality and thin assertions is a human fingernail of truth. In America, you’re nobody until somebody tries to kill you. Think of people who’ve been shot in the last century: John Lennon, Larry Flynt, Ol’ Dirty Bastard, Archduke Franz Ferdinand—all extremely cool. Now think of people who died of natural causes: Carl Sagan, Adlai Stevenson, your grandpa. None of them was cool at all. Who was the best Kennedy? Was it John F, who slept with Marilyn Monroe and punked Nikita Kruschev during the Cuban Missile Crisis? Was it Joe, who hung out with black chicks? Or was it Ted, who lived for 76 years without so much as a blowgun attack and wound up looking like a basketball that had rolled through a pile of feathers onto a scarecrow? The American dream is not to die in bed peacefully; it’s to die in bed with a waitress when her husband bursts through the door. Everyone who is cool knows this.

The principle was brought into sharp focus last week, when Jay-Z—who is so cool that if you kill him, you’re famous, but if he kills you, he’s brainless—told Interview magazine that he was shocked to discover that Eminem wore a bulletproof vest. “When he came to the studio, I remember I hugged him and I could feel that he had on a bulletproof vest. He’s a guy who loves rap and wanted to be successful his whole career. Then he finally gets it, and there’s this dark cloud over him. He has to be afraid to walk around New York freely. I found it sad.” It sounds like a compliment—Jay-Z shaking his head at the double edge of outlandish fame—but, as is usually the case with the kid from Marcy, there’s a biting subtext. It’s sad that Eminem would be walking around in a bulletproof vest primarily because it’s sad that Eminem would think people still want to kill him. At this point, he should be walking around with a Microsoft Certification textbook. It’s sad to say, but Eminem should probably come to terms with the fact that if anyone was going to kill him, it was going to be in 2002. Now there’s nothing left for him to do but wait around to die.

Which brings us to what is perhaps the ultimate irony of the bulletproof vest as emblem of cool: if it works properly, you will eventually become old. As cool as it may be to wear Kevlar now, it virtually guarantees that you are going to become extremely uncool later. Consider the respective fates of Malcolm X and Al Sharpton, of Dimebag Darrell and Ronnie James Dio. Sam Cooke was killed in 1964 after he checked into a hotel with a prostitute, who stole his clothes while he was in the shower. He accosted the hotel manager, Bertha Franklin, who subsequently shot him in self defense. Sure, it was a tragedy, but was there any cooler way for naked Sam Cooke to get out of that situation? If he had checked into a hotel room with a prostitute who stole all of his clothes except for his bulletproof vest, and the cops found him in the manager’s office with no pants on and an enormous bruise on his chest, would he really have gone on to do something cooler than “Chain Gang”?

No—better to die young and stay cool forever. Let’s hope that this bulletproof vest thing remains confined to hipsters and 50 Cent, or to the imaginations of New York Times reporters, so that the cool can continue to die suddenly as nature intended. Otherwise, we’re going to be saddled with a whole generation of Paul McCartneys, creaking around and forming Wings and reminding us that everything, no matter how cool, is just a prelude to the long decades of depressing lameness that inevitably follow. There is only so much Kevlar, after all, and the truly cool will eventually have to reconcile themselves to their destinies. In the meantime, the rest of us will just have to aim for the head.