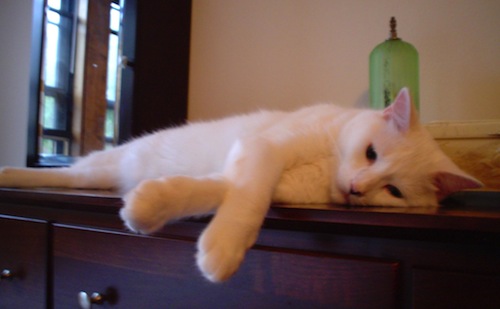 Here I am standing at my desk, sunshine blaring through my window, and it is snowing: I must be in Montana. My glutinous subway cold tells me I was recently in New York, but now all that is as a pleasant dream; there is only the comforting routine of typing Combat! blog, plus a raft of deadlines I put off to enable my weeklong drinking/carousing/companionating binge. Let’s not think about those now, though. Today is Friday, and I am home again. Won’t you luxuriate in the comforts of the hearth with me? By hearth I mean internet.

And by comforts I mean eviscerating terror. The UPI has constructed what is possibly the most alarming headline since Pearl Harbor with “New study finds that bat-eating spiders are everywhere.” I presume this study was conducted by crank addicts. My own orb-weaving spider, so much a fixture of last summer and fall, seems to have retired from my window. (Kombat! Kids: That means she froze to death and blew away.) I was disappointed to see her go, but that was before I knew that certain orb weavers would catch and consume bats. Eating mammals is where I draw the line. Spiders are bugs, as anyone will tell you, and bugs are tolerable only insofar as they consume other bugs.

As any college junior will tell you, mammals are tolerable only insofar as they consume organic, non-GMO foods. That’s why you should listen to scientists instead of hippies, as Mark Lynas recently concluded. Props to the Three R’s, Robin Rose-Rice, for the link. Lynas’s explanation of his shift from militant activist against genetically modified foods to acceptor of scientific evidence is an inspiring story of intellectual honesty. “I’ve obviously been inconsistent in my life,” he told MacLean’s, “but so are we all. In my view, it’s better to be inconsistent and half-right than to be consistently wrong.” Kudos, dude. I’m going to continue obstinately buying organic food, but I will do so with the knowledge that I am an asshole.

Meanwhile, on the other end of the trendy food spectrum, the Montana State House has passed a bill allowing the harvest of road-kill animals for meat. Props to Lukas for the link. I don’t think this is going to help our state’s image but, in the words of Rep. Steve Lavin (R-Kalispell,) “There’s a lot of good meat being wasted out there.” That sentence is also the new ad campaign for Stockman’s bar. If you don’t live in Missoula, trust me when I say that joke is hilarious, and I am good-looking.

Animals are not for hitting with your car and then eating; animals are for loading up on your motorcycle and then posing. I’m not sure the Absolute Worst Pictures of Men and Cats live up to their billing, because as awful as they are, they are also kind of wonderful. I am sure that the internet is the most developed medium for transmitting visual images of cats in human history. Sorry, the calendar.

And now we come to the end. In conclusion, I present the latest installment of Spencer Griffin’s Real Answers From Teenagers, a collection of pleasing sentences from when he graded ACT essays. Did you know your child’s ACT essay is likely to be graded by a hungover college student in Iowa City? Don’t worry; even if some terrible injustice befalls his application process, he can still grow up to grade ACT essays. Circle of life, dude.

Don’t listen to the song, though, or you’ll burn down Redwood National Park.