The problem with reporting a trend while simultaneously attacking it as fake is that you must immediately introduce a degree of critical distance. Were the Brooklyn girl a ubiquitous trope already, Erin Gloria Ryan could point out its absurdities with the confidence that  her readership is already familiar with the concept under attack. Unfortunately, the phrase “Brooklyn girl” has not really caught on.

If you’re hoping the Brooklynification of irritating lady stereotypes is merely a passing fad, I’ve got some bad news: The Brooklyn Girl is A Thing now, like “I’M SUCH A CARRIE!” was A Thing 5 years ago. And it’s going to be this way until another Thing comes along to hoist the mantle of terrible, and then that Thing will be the means of conveyance for characters that evolve into irksome tropes until another Thing comes along, etc, forever. Think of selling the youths crap as a really obnoxious game of tag that old people don’t understand.

Please do think of selling the youths crap that way, because otherwise Ryan’s claims are baffling. Kohen’s original case for the Brooklyn girl as a trend is based primarily on the book of the same name, Girls, and Noah Baumbach’s recent Frances Ha. Her fourth example is Portlandia, which she says “might as well be Brooklyn.” It’s a thin case, in other words, and Ryan is right to attack it—except she begins her attack by insisting that, as a trend, the Brooklyn girl is real.

To the reader, it’s obvious that the referent isn’t real; a Brooklyn girl is not an actual thing that exists in the world. The problem is that the Brooklyn girl doesn’t appear to be a thing that exists in marketing or pop culture, either. There’s the show and the book, and there’s the Kohen article which Ryan appears to hate. Besides that, there is the imagined, abstract effort to sell the youths crap, which old people don’t understand.

Here lies the problem: if the Brooklyn girl is actually a trend people think about that abounds in pop culture, then those mysterious old people are doing a great job. They totally understand how to sell the youths crap, because all they had to do was get one advertorial into New York Magazine and Jezebel picked it up. Ryan is basically re-running Kohen’s original trend piece with a veneer of snark. Her insistence that the Brooklyn girl trend is bullshit requires the fatuous conceit that it is a trend at all, just as her perpetuation of the imaginary trend she claims to hate forces her to position herself against a marketing conspiracy that she herself abets.

It’s kind of confusing. I submit, however, that this problem plagues contemporary pop culture writing. For five decades running, now, the only acceptable position for a culture writer is against an imagined mainstream. We reject trends as inauthentic or mercenary even as we report them. Certainly, the Brooklyn girl is bullshit, insofar as it seems limited to characters in two fictional series. But is it bullshit on such a scope as to be news(-ish), or is it merely something that irked one writer? How can Ryan write truthfully about her evident interest in the Brooklyn girl while simultaneously rejecting it?

Hard life for a Jezebel contributor. Here’s Ryan in the comments section of her own post, sarcastically calling something ironic: 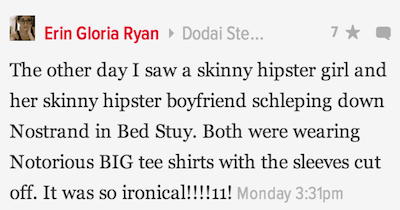 And the ouroboros swallows another vertebra.