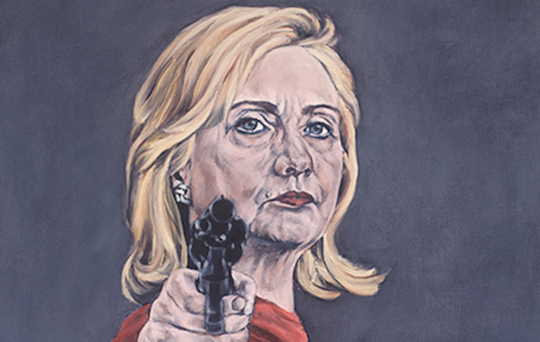 The cover image for Doug Henwood’s “My Turn,” a book critical of Hillary Clinton

Tweeting the cover of Doug Henwood’s Hillary Clinton book My Turn, Salon’s Amanda Marcotte remarked, “I keep hearing it’s unfair to think that some of the male Clinton haters on the left might have issues with women.” She was being facetious. But what about this image is sexist, exactly? It’s not flattering, insofar as it depicts Hillary as ruthless, even cold. But it also places a woman in a position of power, holding a traditionally masculine totem of violent authority, which she points directly at the male gaze. As critical as the title “My Turn” is, in conjunction with this image, it suggests that Hillary is assertively demanding what she believes is rightfully hers. And the artist, Sarah Sole, told International Business Times, “I love Hillary Clinton. I support her. I very much want her to be president.”

So maybe Amanda Marcotte is wrong about this one. Still, Hillary is the only woman candidate for president we’ve got, unless you count the Green Party and Carly Fiorina. But she’s the only viable candidate, and she stands a chance of becoming the first woman president in US history. In this context, being against her means being against all female candidates for president. Trying to stop her from getting elected means trying to stop a woman from taking the Oval Office1 in 2016.

That sure sounds anti-feminist to me. If Hillary symbolizes Woman President, the cover of Henwood’s book definitely expresses “issues with women.” But what if Hillary symbolized, for example, Former President’s Wife? Then “my turn” and the image of the gun seem to express ruthless power and the leveraging of nepotism.

So here’s a fun question: Can you be against Hillary and not be against what she symbolizes? Can you criticize her campaign without criticizing women who run for president?

Probably, the answers to those questions depend on how important you consider group identity in relation to the individual. Sam Kriss touches on this problem in his bomb-ass but recondite rebuttal  to Slavoj Zizek. He’s taking about the relationship between group and individual identity in multiculturalism, but the epistemology applies:

Multiculturalism does not see a person who happens to be Muslim, it sees Islam embodied, and while it might call for all (assumed) differences to be respected, the actual person it addresses is approached only as a signifier of cultural difference. Within these synchronic cultural blocs any internal difference is erased; the fact that these cultures or ways of life are abstractions formed out a multiplicity of real behaviours is abandoned to a mystical idealism. The proper term for this kind of approach is racism.

Insofar as you regard Hillary as womanhood embodied—or her candidacy as the iterated possibility of a woman becoming president—any criticism of her is necessarily anti-feminist. By the same token, if you regard her as first-ladyhood embodied, as I have treated her on this blog before, support for her becomes support for nepotism. These mindsets flatten her, because they elide Hillary the individual in favor of the categories to which she belongs. They usurp the concrete in favor of the abstract.

Of course, that’s easy for a man to say.2 It’s a truism that Americans treat whiteness as the absence of race; white people get to be individuals, whereas people of color get to be representatives of their cultures. Simone de Beauvoir was getting at much the same thing when she remarked that there are two kinds of people: human beings and women, and when a woman starts acting like a human being, she is accused of trying to be a man.

I propose we treat Hillary like a human being a little more—a potentially great or awful human being, but one whose greatness or awfulness does not bear on our assessment of the greatness or awfulness of women. It would be wrong to dismiss her candidacy because she’s a woman. We should dismiss her candidacy because she’s the Wall Street-connected wife of a former president running at a moment when we’re all scared the game is rigged. But it would also be wrong to dismiss criticism of her because she’s a woman. Ultimately, feminism should be about putting aside gender discrimination, not merely reversing its terms. The goal is that Hillary could become the world’s most powerful head of state, not that she could become the world’s most powerful woman.