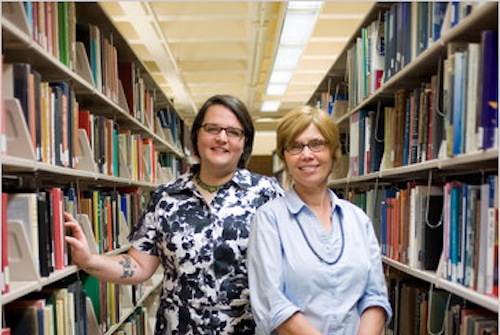 The New York Times once again stretches its credulity to stretch ours with this article about student plagiarism, whose central thesis seems to be that kids today don’t understand the concept of authorship. Props to Mike Sebba for the link. The article contains the usual professorial stories about hilariously obvious student copying, including this classic font-shift tell:

The tip-off to one student’s copying was the purple shade of several paragraphs he had lifted from the Web; when confronted by a writing tutor his professor had sent him to, he was not defensive — he just wanted to know how to change purple text to black.

First of all, way to hand the problem off to the writing tutor, professor who does not want to have to go to academic court. Second, the article considers this and other anecdotal instances of egregious ripoff—plus the omnipresent recent surveys, in which the number of respondents who say that copying from websites constitutes “serious cheating” declined from 34% to 29%—and concludes that modern college students don’t understand the concept of plagiarism. Guess why? If you said “the Internet,” then congratulations—you’re ready to write trend pieces for the New York Times. Here’s your Zune.

There is, of course, an obvious connection between the invention of the world(-)wide web and college plagiarism, and it’s searchable text. It explains why, for example, my exchange freshman from Afghanistan once gave me a personal essay that was just an Associated Press story with “my uncle” substituted for the name of a Kabul policeman, in what very briefly appeared to be a stunning improvement in her English.

It also explains why instances of campus plagiarism are on the rise. That shit is super easy, and “easy” is a quality that is going to appeal to the plagiarist demographic. What does not explain the putative rise in campus plagiarism, on the other hand, is a fundamental shift in cultural concepts of ownership and individuality that somehow happened within the last fifteen years. But at least it fails to explain it at great length. Notre Dame sociologist Susan Blum “contends that undergraduates are less interested in cultivating a unique and authentic identity—as their 1960s counterparts were—than in trying on many different personas, which the Web enables with social networking.”

That’s the trend story trifecta, right there: the contention that the current crop of young people is fundamentally different from all known human beings up to this point, the nostalgic agreement that Baby Boomers invented individualism, and the vague connection to Facebook. Exactly how social networking makes it possible to try on different personas—in a way that, say, walking around and being affected did not—goes unmentioned, as does the assumption that college students’ approach to assigned essays about Things Fall Apart reflect their deepest values.

But at least it mentions sampling in hip hop. Near the end of the article, after we’ve talked to the theoretical sociologist and explained what the term “texts” means, we get the admission that we knew was coming: “At the University of California, Davis, of the 196 plagiarism cases referred to the disciplinary office last year, a majority did not involve students ignorant of the need to credit the writing of others.” In other words, most kids plagiarize as a form of cheating, and not because the internet has erased their generational understanding of intellectual property.

It’s as inevitable as the opening of the envelope at the end of a game of Clue, and it’s become a convention of the form. This late acknowledgement that the whole speculative exercise can be quantitatively refuted indicates, more than anything else, that the trend story has become a genre similar but not identical to journalism. It relates to the rest of the newspaper in roughly the same way that pro wrestling relates to the Battle of Hastings. Which is to say that it’s fake, and I personally find it much more fun.