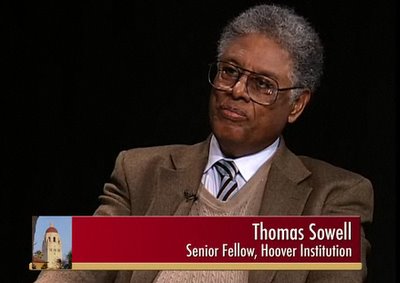 Dr. Thomas Sowell, who did not realize the sour candy was going to be this sour.

The logical question, of course, is “Who the [fudge] is Thomas Sowell? I mean [gosh] [darn] it, why are you wasting my time with this [sugar], you [fudging] [dinner companion for business travelers]?” It’s weird you’d ask that, though, because Thomas Sowell knows exactly who you are: some kind of idiot. Witness his most recent column at Townhall.com,* in which he speculates that the vaunted intelligence of Barack Obama and his team of advisors is, in fact, a disadvantage. “There is usually only a limited amount of damage that can be done by dull or stupid people,” Sowell writes. “For creating a truly monumental disaster, you need people with high IQs.” Specifically, you need people with high IQs to tell the dull and stupid how to think about politics—that’s when you can really started messing [shirts] up. I presume that part was cut for length.

Sowell needed the space to back up his point with historical evidence, which he has plenty of. Consider the example of FDR’s “Brain Trust” in the 1930s, whose New Deal policies—as is now “increasingly recognized,”**—did more to prolong the Great Depression than actually end it. “The Great Depression ended only when the Second World War put an end to many New Deal policies,” Sowell claims. Lest you think that increased production and consumption encourages economic growth, though, he also debunks the claims of those who believe wartime spending and manufacturing is what turned things around. “They never ask the question as to why previous depressions had always ended on their own…” he says.

It’s true that we are not currently living under the cumulative effects of all economic depressions suffered throughout history, and I do often fail to ask “the question as to why” such things happen, opting instead for the lazy man’s “why?” More specifically: As a man with a PhD in economics from the University of Chicago, why did Dr. Thomas Sowell forget the American depression of 1873, which remained a full-blown depression until 1879 and “ended on its own” with a series of recessions and contractions that continued for the next twenty years? Maybe it’s because he’s trying to avoid the terrible consequences of knowing things. What kind of consequences, you ask?

“Make no mistake about it, Adolf Hitler was brilliant,” Sowell says. Here is an argument so clever that only its comma splice can save Sowell himself from being overwhelmed by intelligence and murdering six million Jews. Sowell knows who else was smart, too: Robert McNamara and the Pentagon staff under Johnson (Vietnam war,) the 1930s editors of the London Times (underreporting of Nazi atrocities,) and Juan Peron (economic collapse of Argentina.) “Such people have been told all their lives how brilliant they are,” Sowell writes. “But they…tend to over-estimate how important brilliance itself is when dealing with real world problems.”

In other words, if this country wants to avoid a hyper-inflation Nazi Vietnam scenario, we’re going to need dumber leaders. When faced with such an argument, one is forced to wonder exactly whom it is designed to appeal to—particularly when it is constructed by Dr. Sowell, who in addition to his U Chicago PhD holds degrees from Columbia and Harvard, and won a damn Bradley Prize for Intellectual Achievement. Perhaps Dr. Sowell is simply not aware of certain logical fallacies, such as affirming the consequent, and that’s why he finds his Hitler argument compelling. Then again, he’s the man who constructed this freaking master class in rigorous logic in order to refute The Bell Curve.

The mind at work in that essay—not to mention the diction by which it conveys itself—is hard to reconcile with the man warning us against “brainy folks” on Townhall.com. Of course, Sowell’s biography—he never knew his father, was raised in 1940s Harlem by his mother’s sister, whom he believed to be his mother, and dropped out of high school at age seventeen because of his family’s financial collapse—is hard to reconcile with his vigorous opposition to affirmative action. One would think Thomas Sowell knows that smart black kids can be thwarted by circumstance, just like you’d think he knows that smart people can have good ideas for solving problems. Maybe in both cases, though, Sowell has drawn a line between “me” and “them.” On one side is how things are, and on the other side is how people should be told things are. The real danger of a smart person, of course, is that he keeps stepping over to Sowell’s side of the line. Once he gets there, he can choose how he wants to talk to people. At that point, the difference between him and Sowell stops being one of intelligence and becomes one of morality.

** Which, when you think about it, is an incredibly sinister phrase, combining as it does the presumption of independently existing fact implicit in the word “recognize” with the means-nothing-so-it-can’t-be-false “increasingly” with the disembodiment of the passive voice.