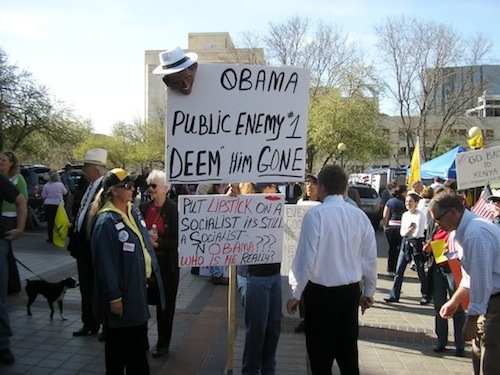 Yeah, who is the President of the United States, really? So little is known about him.

If you don’t already subscribe to the Tea Party Nation newsletter, you are missing some great stuff. The TPN is only one of several groups that claim to be the national Tea Party organization—it’s unclear yet whether they’re the Bolsheviks or the Mensheviks, so to speak—but they are the canary in the dark, radon-filled mine that is America’s conservative subconscious. First of all, sorry for cramming three metaphors into one sentence. Second, TPN’s most recent screed, entitled The Horrors of Illegal Immigration, is short and spooky enough to quote at length. Check it after the jump.

The drum beat for Amnesty is here.  The Obama Regime and the drive-by media are pushing Amnesty with stories about illegals who are just here “to make a better life” for themselves.  The media is ignoring stories of the horrors if illegal immigration.  At TPN, we want to highlight some of these stories.  We need your help.

We have set up a forum for stories of illegal immigration.  If have [sic] been the victim of a crime by an illegal, or if your business has gone under because your competition uses illegals, or if you have lost your job to illegals, we want to know about it.  If you have photos and videos of illegals or their supporters doing outrageous things (like burning the American flag or putting the Mexican flag above ours, or showing racist posters), please share those as well.

Of the phrases that this email attempts to coin, I suspect that “Obama Regime” is going to circulate better than “drive-by media.” One thing that can be conclusively said about the contemporary media is that it does not appear briefly and then vanishes from our lives in the manner of a drive-by. Besides an approach to meme production that is more enthusiastic than crafty, this email gives us two insights into whatever is going on over at Tea Party Nation.

First, they seem to be drifting with the current of vaguely ethnic nationalism that is sweeping through mainstream Tea Party rhetoric. What started as a tax protest and moved into a nostalgic Constitutional fundamentalism has become more and more interested in identity lately, with a corresponding uptick in “take our country back” and other subtly exclusionary catchphrases.

The Tea Party is demographically white. Increasingly, they seem to be ideologically white, too. There has always been a subtext of white identity in the birther and anti-Muslim fringes of the movement, but the recent focus on anti-immigrant positions—which, when you think about it, doesn’t necessarily follow from the rest of their libertarian and strict constructionist ethos—seems more openly racist. If you suspect that I’m exaggerating the trend, as I did before I checked out the TPN website this morning, I would like to point out that they just announced Lou Dobbs as the headline speaker for their national convention.

Second, this short email nicely summarizes one type of bad thinking. Having decided that illegal immigration is a “horror,” TPN now asks for evidence. Surely they reached their position on immigration from some concatenation of lived experience,*

but to all outward indications they’re starting with the conclusion and going from there. Besides inviting a series of Photoshop falsifications with their call for pictures of Mexicans burning the American flag, TPN is basically reversing what ought to be the American process of public deliberation.

I’d be open to the argument that that’s what’s wrong with contemporary discourse. Besides a disappointing reliance on anecdotal evidence, the tendency to decide and then pick from the available materials to construct a compelling argument is not a good way to figure out what to do. It’s a fine way to convince people of your position, but that’s not what the marketplace of ideas is supposed to accomplish.

Immigration is a serious issue/problem, and it could easily have an existential impact on the future of this country. If you believe that America is a fundamentally white nation, the way forward is fairly clear: there should be fewer not-white people. If you believe the answer is probably more nuanced than that—like the answers to looming deficits, the war on terror, health care and any number of other problems—sponsoring a scary picture contest is probably not the way to deduce it. We have participatory politics for a reason, and it’s not to more efficiently gather backup for our arbitrary positions.