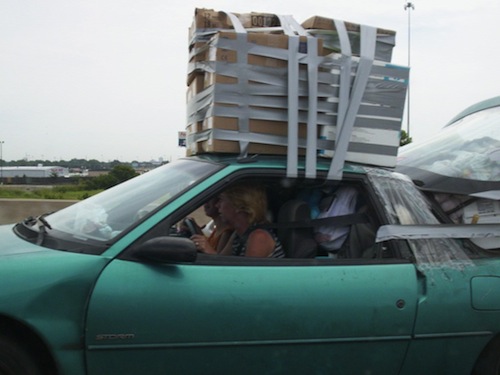 It’s 9am in Washington, DC, and I am looking at a lot of boxes next to things that should be in boxes. Combat! blog has temporarily relocated to the east coast to A) help my brother move and B) finally eat some good Mexican food again, and boy, are we busy. Don’t worry, though—there’s always time for a Friday link roundup. There’s just not time to make it good. This week, Combat! blog presents links that we found in our Write About It Later file just before we dismantled a coffee table. Will it prepare you for a weekend spent doing things at the last minute and therefore pausing to consider what, in a temporal universe governed by random subatomic interactions, a plan even is? Sure—why not?

The best way to get a bunch of stuff done early in the morning is, of course, to scare yourself absolutely shitless. Fortunately we still have a Washington Post, which has produced this investigation of the growth of the American classified intelligence industry. Fun quote: “The top-secret world the government created in response to the terrorist attacks of Sept. 11, 2001, has become so large, so unwieldy and so secretive that no one knows how much money it costs, how many people it employs, how many programs exist within it or exactly how many agencies do the same work.” That sounds like the responsibly administered democratic government of a free society to me. I don’t want to harp on my theory that vague language makes vague praxis in the War on Terror—which isn’t really a war, and is waged against a thing that isn’t a person or a country, and has no physical location—but it’s possible that a massive, disorganized secret network of secret organizations is symptomatic of us not knowing what the fudge we are doing.

Lest we overstate the case in our fretting over a government that has given almost 900,000 people top-secret security clearance, though, The Freethinker gives us a look at what real totalitarianism looks like. Shockingly, it’s closely related to church. A 25 year-old air traffic controller was found hanged in the Maldives this month, after he admitted to some of his coworkers that he was an atheist. Ismail Mohamed Didi had already been the subject of an internal investigation by his employer, the Maldives Airports Company Limited, regarding his suspected apostasy. Question: Do you want a man who believes deeply in the existence of a benevolent god who guides shepherds the righteous in their day-to-day lives working as your air traffic controller, or do you want a guy who thinks it’s all up to him?

I’m not saying that a secular society necessarily manages its transit better. Now that we’re on the east coast we have regained our right to criticize things, and I hereby criticize the MTA for seeking yet another fare hike just one year after the biggest service cuts in recent history. I also criticize the New York Times for suggesting that heavy commuter loads are due to the unlimited ride Metrocard, “which pushed ridership to record levels after its introduction in the 1990s and revolutionized the way New Yorkers imagine their transit system.” First of all, did the prospect of riding the subway as much as they wanted really revolutionize the way New Yorkers imagined the subway? Second, perhaps extremely heavy subway and bus loads are the result of the last ten years of skyrocketing real estate costs, which have made it virtually impossible for middle-class people to live in Manhattan?

Then again, maybe people just love the particular aesthetic of New Jersey. Troy Patterson, who has perhaps the most existential despair-inducing job in the world as the television critic for Slate, clearly enjoys his work. Witness this article about the return of MTV’s Jersey Shore, in which he opines that Snooki’s life is some form of conscious decision. “Mouthy and strutting,” Patterson writes, “she puts herself together such that her overall look is always posing an insolent question to bourgeois values: ‘What are you looking at?'” It doesn’t get any better than that.

Now I have to pack glassware.