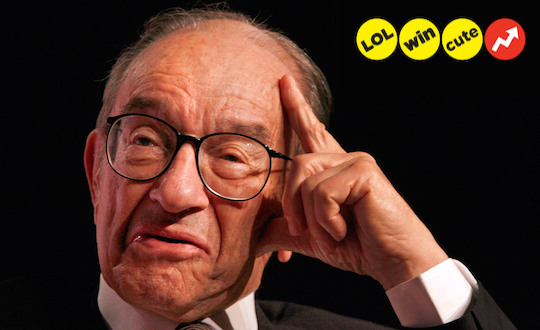 This Fed chair announced quantitative easing. You won’t believe what happened next.

Last year around this time, the internet briefly worried/hoped that the New York Times innovation report would lead the paper to become more like Buzzfeed. That didn’t happen—or did it? The Gray Lady has not become obsessed with viral stories or replaced page A1 with its Twitter feed, but it did run a Sunday op-ed titled What You Learn in Your 40s.1 It’s nice. Its premise is also remarkably similar to this Buzzfeed listicle, or this one, as well as this one and these. The difference is that the Times essay is built around a tone of humorous reflection rather than GIFs from Friends, and it’s about being 40 instead of 20.

Also, Buzzfeed would never leave that last sentence in there to enrage the intersectional internet.2 Basically, though, this is share-bait: a fun lifestyle piece aimed at a specific cadre of readers, likely to appear amid the baby pictures on your Facebook feed with the endorsement “so true.”

This description makes it sound like I didn’t like Pamela Druckerman’s essay, but I did. I also do not want to take the disingenuous position that the Times should be or has been all hard news. A plurality of the paper’s content can probably be filed under “fluff,” be it stories about how rich people found apartments or specious trend pieces. My work for the Times certainly falls under that rubric. So this essay is by no means a turning point.

The formal similarity to a clickbait archetype is striking, though, and it should draw our attention not to how the Times has become like Buzzfeed, but to how the separation we imagine between the two is a distinction without difference.

The NYT and Buzzfeed are about the same project: amassing as many readers as possible. Despite Buzzfeed’s recent foray into hard news and the Times’s longstanding policy of publishing whatever, the two outlets are ostensibly selling different content. From the perspective of both pre- and post-digital marketing, however, what they’re really selling is different audiences.

It costs more to advertise in the New York Times because people who liked this essay about mellowing out in Paris before your 44th birthday presumably have more money than people who liked 23 SpongeBob Episode Titles That Perfectly Sum Up Life in Your 20s. But the essential transaction is the same: the publication establishes a consistent audience or the impression of a consistent audience, and then it sells itself as a medium between that audience and advertisers.

So I put it to you, Times reader: is this the kind of thing you like? At the risk of overstating my interest in what is essentially a slight piece, I say yes. I must therefore consider that a Times reader is not so different from a Buzzfeed reader, as much as he might like to believe otherwise. Apparently, the main difference is that I’m old.