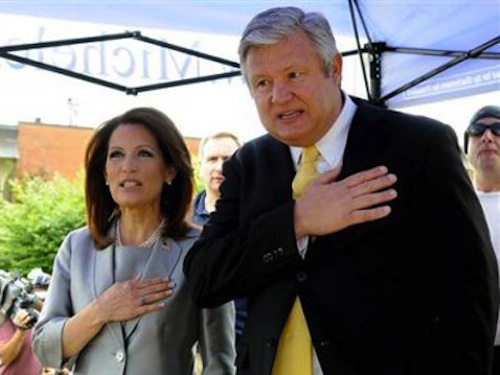 Michele and Marcus Bachmann—which of these people is insufficiently accustomed to making false pledges?

In her ongoing attempt to turn “job creators” into a political meme synonymous with “rich people,” Michele Bachmann has made much of the mental health clinic she founded with her husband, Marcus Bachmann, PhD. Although Marcus and Michele deny it, the Bachmann Clinic has been accused of performing “reparative therapy”—an APA-discounted approach to changing the orientations of homosexuals. Basically, it’s a pray-the-gay-away therapy, in which deeply conflicted homosexuals are told to read the Bible, repress their same-sex attractions and, if necessary, commit to lives of celibacy. Telling people that their romantic impulses are unnatural and possibly the result of a malevolent, supernatural force is clearly the best way for a board-certified psychiatrist to promulgate mental health, so we’re not even going to talk about that. Instead, we’re going to address a stickier, even more deeply throbbing problem, which I think Jon Stewart captures nicely in this video:

Marcus Bachmann: that man is a homosexual.

Of course he isn’t. He’s married to what for purposes of taxonomy I am forced to call a woman; he is deeply committed to an evangelical Christianity that prima facie rejects homosexuality if not homosexuals, and he probably says, “I’m not gay!” in a very loud voice when you least expect it. That’s pretty conclusive evidence, whereas there are only three reasons to believe he is gay:

1) Based on the video, he often puts both arms above his head during dancing.

That last one is such a reliable indicator that there is no means of expressing the concept of a non-gay Marcus in English. But again—Marcus Bachmann is married, fathered five children, and acted as a foster parent to like 23 teenage girls. Not only is he straight, he appears to be killing it.

The problem is that he has also devoted his professional life to killing it. In what I have taken to calling the Fowlkes Effect,* the people who most fervently

believe that homosexuality is a choice are often those who are constantly choosing to ignore their own homosexual urges. Perhaps Marcus Bachmann founded the Bachmann Clinic because he has so much experience forcing himself into encounters with Michele’s, um,  job creator. As we all know, when a man with a mild lisp tells you that you can make yourself enjoy heterosexual love, it is critically important that you avoid eye contact with his wife.

That’s fun, isn’t it—saying that Mar-Bach is a homosexual and that his straight behavior is aberrant? Unfortunately, it is predicated on the same kind of reasoning that makes the Bachmann Clinic so awful. In reparative therapy, the gay man is told that the homosexual acts in his history are aberrations, and that his essential being is straight in a way that supersedes his behavior. In wryly asserting that Dr. Bachmann is gay, we say that his heterosexual behavior is aberrant, and the core of his being is et cetera etc.

In both cases, we argue for an essence that precedes existence—that what you are can somehow be determined independently of what you do. We imagine a real Marcus Bachmann that contradicts his behavior, and imply that he would be happier if he adhered to his real self. In the same way, Marcus Bachmann tells a bunch of 19 year-olds who keep giving handjobs to other dudes that their real selves are straight, and they will be much happier just as soon as they marry shrill religious activists who wear too much eye makeup.

Both parties reserve the right to tell other people who they are, which is gross on first principles. Worse yet, Dr. Bachmann’s therapy is at least predicated on the idea what what you do can take precedence over what you “are” as evidenced by your impulses and emotions. In Being and Nothingness, Sartre argued that “there are no homosexuals—only homosexual acts.” On the one hand, it’s a noble assertion of human freedom and the primacy of choice. On the other, it’s the exact same argument that obviously insane church people use to justify “curing” their friends’ gay kids.

So we’re maybe in trouble here. In order to delegitimize the persecution of homosexual Americans, we need to acknowledge that being gay is not a choice. Yet in order to respect the freedom and dignity of same, we must reject the notion that people have a predetermined essence that can exist in opposition to their behavior. Also, we want to be able to look at people like Marcus Bachmann or our high school choir accompanist and say, “No, dude—you’re gay.” Unfortunately, we cannot do all three without being dicks. Emily Post famously remarked that etiquette is the art of making other people feel comfortable. It is also the art of telling the truth without being a jerk. Sad to say, but rarely the twain shall meet.