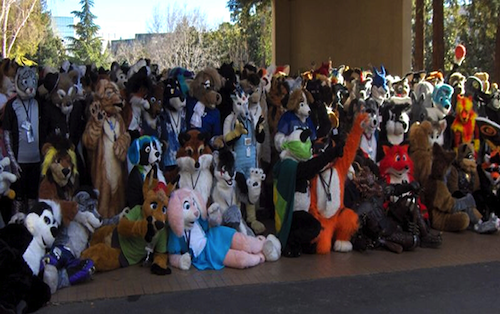 A bunch of furries do their weirdo thing that is, like, of central importance to them.

You know what the best part about contemporary relativism is? Not being a dick anymore, but continuing to privately regard all other cultures as hilarious. For example, I recognize that Judaism is a beautiful tradition responsible for much of what I consider best within us and many of the best among us. But the hats! It’s almost as ridiculous as the Juggalos with their Faygo, or the way World of Warcraft players consider “umadbro” a riposte to any criticism, or like how Jeb Bush thought it was okay to steal. The particulars of a culture seem totally necessary and standard to the people inside it, and so logic dictates*

that every other cultural behavior is arbitrary and weird. Restraining the tendency to act on this sensation among the general populace is the great achievement of cosmopolitanism. Recognizing that pretty much everything constitutes a culture is the achievement of postmodernism. But it’s Friday; achievement is behind us, and so I invite you to indulge with me in the achievement of the chimpanzee, by braying loudly at everything but what we’ve got going right here.

Perhaps most satisfying to bray at is the News of the World phone hacking scandal, which respects the News Corp tradition of saying in bold terms what people already think. From his presumably amazing new office at New York magazine, Frank Rich discusses with Adam Moss how the imbroglio confirms what we all basically knew about Rupert Murdoch: he can be kind of unethical. Mad props to Adam for the link. Because our man Rich knows a microculture when he sees one, he also notes the degree to which Murdoch and his corporation justify their behavior by casting themselves as outsiders, if not renegades. When it’s you against society, a selfish disregard is just team spirit.

Not everyone has so much pride in their own ball club. Like Yankees fans under Steinbrenner, congressional Republicans continue to cheer for America while lambasting the management. As if to demonstrate that, okay, Congress is responsible for the debt ceiling, and we’re in Congress, but that does not mean we’re responsible for the debt ceiling, the House Appropriations Committee has recommended that we cut the budget of Congress itself. It is the one program nobody supports. In case you don’t yet regard this as the ultimate expression of our legislators’ cultural compulsion to avoid responsibility: the cuts stipulate a significant reduction in the size of the Government Accountability Office. When all our other industries have collapsed, America will still make the best irony.

Say what you will about this country: the United States is still the place where murdering a bunch of people and then yourself is not cool. Apparently, there were once places where it was considered unavoidable. Back when Captain Cook could not fucking believe the shit they do on this one island, the Malay took it for granted that sometimes people would just go amok, “indiscriminately killing or maiming villagers and animals in a frenzied attack.” It’s where we get the expression “to run amok” and also why animals mistrust us, and for centuries psychologists considered it an observable phenomenon in quote-unquote primitive cultures. That individuals conspicuously run amok in our own culture went unobserved, at least until Dr. Saint Martin. I hope the JD after his name does not mean that he has also presented this paper as a defense.

I think I speak for all of us when I say, finally, Kevin and Eric Mend Their Relationship again. I did not have MTV when The Real World came out, but I remember it being, along with the Singles soundtrack, probably the most important thing about the nineties. That decade seems now a rare combination of innocent and tired, as The AV Club’s TV Club recaps so efficiently remind us. A half-hour reality show about Eric Nies and a black guy agreeing that they both deserve respect is not my idea of gripping television. Yet at the time it was amazing. At least now we can watch it and simultaneously think about the contemporary version.

That such was the best video of that I could find disappointed me so much that I’m ending with this Arrested Development video, for no reason: