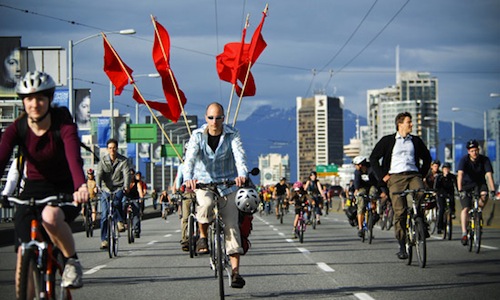 Cyclists at the Critical Mass bike ride in Vancouver

When I visit Los Angeles, I am chauffeured from hot tub to bar to party to beach in private automobiles and therefore learn nothing of the city’s freeway system. There’s a 110*

and a 101, and until last weekend there was a 405. That last one is really important, apparently, since its closure for construction prompted LA city officials to declare “Carmageddon” and urge Angelenos to stay home all weekend. The predicted final reckoning of good vs. evil cars didn’t really happen, but it seemed like enough of a possibility that Jet Blue offered a special flight from Burbank to Long Beach airports. Solving a traffic jam by taking a jet airplane across town was so stunningly American that it, in turn, prompted the Flight vs. Bike Challenge, in which a team of cyclists tried to beat the Jet Blue plane from BUR to LGB—and won, easily.

It turns out that while a jet airplane moves much more quickly than a bicycle, getting on a bike takes about six seconds, whereas getting on a plane takes ninety minutes/away your constitutional rights. By the time the Jet Blue passengers had their waters poured out and genitals inspected and were actually lifting off the tarmac, the bike team had reached downtown LA. From there it was gravy, and they arrived at the Long Beach lighthouse 80 minutes ahead of Team Plane.

So it was a good day for cyclists, and it offered some small insight into the larger question of what to do when gasoline costs $10 per gallon and 120 million people live in the greater Los Angeles area. That day is coming, and I can only think of two solutions:

Frankly, option (1) seems more plausible. One of the many ways in which America is awesome is that everything west of Pittsburgh was built after the automobile was invented. Hence the practice of suburbs, which offer the relentless neighbor contact of city life with the dramatically increased likelihood of DWI that comes with living six miles away from everything. I grew up in West Des Moines, Iowa, and if you stand in my mother’s front yard, A) she will come out with a shovel and B) the nearest food source is two miles away. Unless you want to go to a gas station—there are gas stations everywhere.

My point is that the use of cars is not just a habit; in the United States it is structural, a paradigm literally built into our daily lives. There are exceptions, of course—Manhattan, where owning a car is regarded as a liability, and the densely urbanized downtowns of certain mid-market cities. For the most part, though, the decision to just ride a bicycle is the decision to either limit your mobility to poorly planned trails designed for recreational travel only or to throw yourself into a stampede of two-ton steel cell phone booths while balanced on an aluminum trapezoid. Fun? Yes. Commuter solution? Not so much.

Here we run into what is called a collective action problem. If every able-bodied person in, say, Los Angeles committed him- or herself to taking a bicycle for all trips shorter than ten miles, an enormous number of that city’s problems would be solved. Yet if only one person does it, he will be run over by a Bronco with no license plate on the third day. The collective action problem is distinguished by A) collective benefit, provided everyone behaves a certain way, and B) individual disincentives for any one person to behave that way.

One can view the history of civilization as the progressive solving of collective action problems. The Golden Rule/Categorical Imperative/Christian ethical system is a classic example of an early solution to a collective action problem. The individual in Romanized Judea benefited from relentlessly exploiting/deceiving/enslaving every stranger who crossed his path. Yet the larger Judean culture benefitted from viewing individual behavior from a collective standpoint and asking everyone to be nice—benefitted so evidently, in fact, that the idea spread throughout the Empire.

Then barbarians sacked everybody in an instance of network externality, but I digress. The point is that collective action problems are all over the place, and they must be solved, and the classic solution is ethics or—if you insist—morality. Those of us who like to imagine that moral concerns are anachronisms of an older society might consider the degree to which our LA cars don’t just burn gas and pollute the air but also make it more difficult for other people to ride bikes. In other words, our immoral behavior makes it more difficult for other people to behave morally.

That’s the thing about society—you can’t opt out. You are stuck with these people, in which case here’s another fun thing to think about: the history of civilization is also the history of failing to solve collective action problems. Given our overall good track record with CA problems in America and the present state of our institutional morality, do you think we are better- or worse-equipped to solve such problems today?