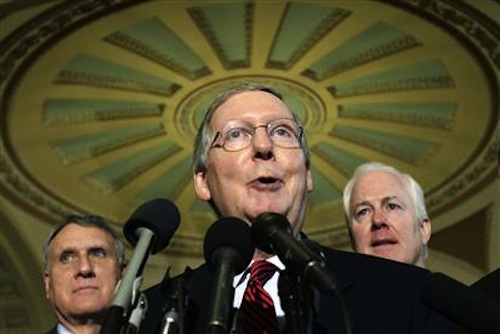 Unless stepmother lets us eat all the cake we want?

As the August 3rd deadline to either raise the federal debt ceiling or submit to our Chinese masters nigh approaches, Mitch McConnell has proposed a new solution: Congress could authorize President Obama to increase the borrowing limit himself. The Senate Minority Leader suggested that the President be given the authority to allow an additional $2.4 trillion in debt over the next year, provided he specifies an equal amount in spending cuts. It’s an odd move, given that negotiations have foundered for weeks on Republican demands that the President agree to cuts before the ceiling is raised. Unless you are a Republican, in which case negotiations have foundered on the President’s insistence that 25% of the increase be covered by taxes on corporations and the wealthy.

The logical compromise seems like it would be to raise the ceiling, require compensatory cuts and increase revenue, but that’s because you’re picturing yourself and your conservative friend sitting at the negotiating table. To really get into everybody’s head, here, you need to picture the dog negotiating with the vacuum cleaner. “After years of discussions and months of negotiations, I have little question that as long as this president is in the Oval Office, a real solution is probably unattainable,” McConnell said Tuesday morning. He was speaking to the Senate, and he was asking them to give the President all the authority he wants.

Does that seem odd to you? If pre-approved spending cuts are so important to congressional Republicans that they’re willing to risk federal default, why cede the authority to demand them? There is only one difference between the unacceptable scenario in which the GOP agrees to raise the ceiling without prior cuts and the acceptable one in which we raise the ceiling on the promise of cuts later. In the second one, the President is in charge of increasing the debt limit himself.

There are two ways to interpret such a move from McConnell, who said after the midterm elections that the goal of the Republican Party was to make Obama a single-term president. It’s possible that, like other senior GOP congressmen, the Minority Leader thinks the existing cuts/ceiling deal is acceptable—but he doesn’t think he can get his delegation to agree to it. Certain blocs of the current Congress, who will remain nameless but may be named after authors of one-dimensional novels, are so committed to drastic cuts in spending as to make Republican agreement to a sensible compromise impossible. In this light, McConnell’s proposal suggests that the GOP is too internally divided to work effectively. The kids keep fish-hooking him from the back seat, so he’s going to let the President drive us to the mortgage office.

That’s the charitable interpretation. The less charitable interpretation is that, for all his talk about the looming disaster posed by our national deficit, Mitch McConnell would rather preserve the problem as a weapon against the President than solve it. The prospect of Congress raising the debt ceiling with no strings attached is unacceptable, thwarts American prosperity, mortgages our children’s future et cetera, but if Obama did it that would be just ducky. Authorizing the President to raise the debt ceiling unilaterally allows McConnell and the Republican caucus to wash their hands of the disaster, like when Bobby Brown let Whitney have as much coke as she wanted.

If that is McConnell’s plan, it is a disgusting abdication of responsibility. Regardless of how you feel about the roles of spending cuts, revenue increases and potential default in negotiations on the debt ceiling, you have to agree that it is the role of Congress to address the problem. To refuse to compromise with the President and then suggest that he be given the power to draft the package himself is to place politics above the basic functions of government. Unlimited deficit spending would be a disaster, unless it’s Barack Obama’s disaster. Then it becomes a goal.

I sincerely hope that is not Mitch McConnel’s thinking. If it is, he has given a clear indication that the Republican Party would rather preside over a broken America than share power in a functioning one. “Better to reign in hell,” says Milton’s Satan, “than serve in heaven.” One hopes that Senator McConnell’s attraction to the throne is not so powerful as to pull us all down there with him.