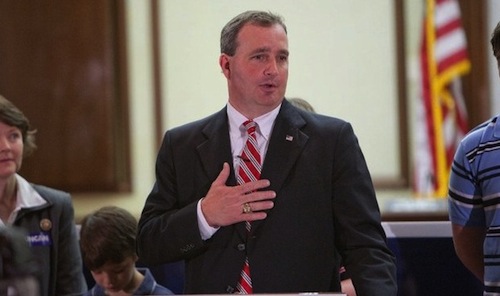 The quote above comes from this New York Times article, in which conservative and then mainstream Republicans explain their attitudes toward the ongoing government shutdown. Interestingly, where they stand tends to correlate with how long they’ve been in office. Of the representatives quoted who supported tying a continuing resolution to defunding Obamacare, Steve King (R–IA) is the most senior, having assumed office in 2003. The next most experienced Reps in favor of shutdown were elected in 2010. It’s possible that means they haven’t been so long exposed to the corrosive effects of Washington party politics, so they’ve stayed true to their conservative principles. It’s also possible that they don’t know what they’re doing, and their confidence is a product of the Dunning-Kruger Effect.

Part of what’s so frustrating about the shutdown gambit is that it has no discernible endgame. Having somehow intimidated John Boehner into ignoring his duty to prevent such bills from reaching the House floor, House Republicans bluffed at the Democratic Senate with an outcome neither party wanted. That’s a bad bluff. It was bad for Harry Reid to call it, in the sense that the shutdown is bad for America, but it was arguably worse for the GOP. Now conservative Republicans have almost no bargaining power, since their two remaining plays are A) concede and pass a clean continuing resolution or B) continue the shutdown while they wait for Senate Democrats to do something different under the same conditions.

Strategically, it’s a dead end. A more experienced cadre of Republican congressmen—for example, the ones who have been increasingly vocal in their criticism of the Tea Party wing—might have thought a little more deeply about what they would do if the government shut down. But the Obamacare defunders lack the experience to strategize effectively. You can see the blank spots in their projections of the future, because they are occupied by arbitrary good outcomes.

Consider King’s assessment. “We’ve passed the witching hour of midnight, and the sky didn’t fall, nothing caved in,” he told the Times. “Now the pressure will build on both sides, and the American people will weigh in.”

It is true that we passed the shutdown deadline, and it is also true that pressure will build the longer the federal government remains closed. But how, exactly, will the American people weigh in? Will there be some sort of special vote in the next few weeks? Even if there were some mechanism for public opinion to influence the shutdown stalemate, why would Americans feel any differently about it than they do now— overwhelming opposition to King’s strategy?

Incidentally, Rep. King spent yesterday at the DC World War II Veterans Memorial, helping Iowa vets push past barricades the Park Service erected when the government shut down. He is described as “distracting” a park police officer while other congressmen knocked over the fences. The irony of this scene appeared to be lost on him. Veterans are good, obviously, and shutting down the federal government is good. How could the two ever come into conflict?

If King hasn’t thought much about either his priorities or his endgame, he is not alone. Raul Labrador (R–ID) seems similarly convinced that phase three will be profit:

It’s getting better for us. The moment where Republicans are least popular is right when the government shuts down. But when the president continues to say he’s unwilling to negotiate with the American people, when Harry Reid says he won’t even take things to conference, I don’t think the American people are going to take that too kindly.

Like King, Labrador seems to believe that the American people will turn against the Democratic Party as the shutdown drags on. His theory rests on the assumption that Republicans are fundamentally more popular than Democrats on this issue, because Obamacare—an idea that is empirically refuted by polls.

Again we return to the Dunning-Kruger Effect. A more experienced group of Republicans—perhaps ones who experienced the shutdown in 1996—might realize that Senate Democrats have little incentive to negotiate just now, and Americans even less incentive to turn against them. But the conservative wing of the House lacks the experience to identify their own mistakes. They caused the shutdown, so obviously it must serve their interests. The rest of Congress may know better, but for the time being, they are at the mercy of the confident and stupid.