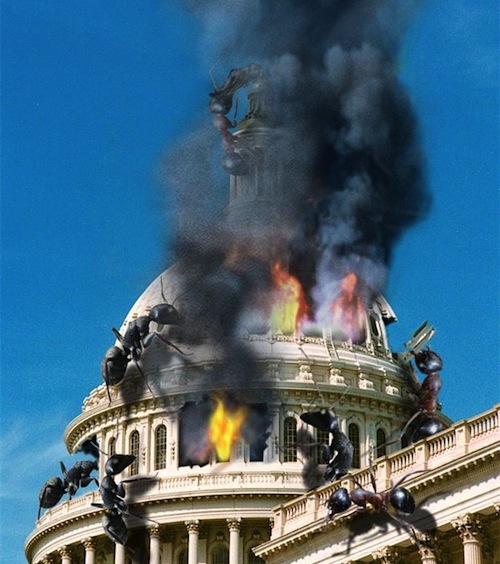 Capitol Hill is destroyed following closure of the Department of Ants.

My girlfriend works for the Forestry Department doing complex scientific experiments that I don’t understand. Yesterday morning, she was assured via conference call that her department would keep operating during any federal shutdown. Later that afternoon, they told her she would report to work this morning to be furloughed. All the Forestry technicians in the field have been recalled. Those of her colleagues who happened to be running experiments that required techs in the field are, to put it in scientific terms, hosed. Maybe the Forestry employees will get paid for the period of time in which they couldn’t do their jobs anymore, and maybe they won’t. 800,000 Americans are out of work today, but at least the government is leaving my health insurance alone.

Like many people, I assumed that after the government shut down everything would be fine. The crisis was settling on a continuing resolution before the shutdown deadline, and once the deadline has passed, the crisis is by definition over. I see now that my view was shortsighted.

As of this writing, House Republicans are no closer to reaching a deal with the rest of the federal government. They insist that they have compromised by offering a mere one-year delay in the implementation of Obamacare rather than total defunding, but that is bullshit for two reasons:

Probably you are familiar with and agree to these claims already. I mention them because, in the absence of any concrete legislative solution, Congressional Republicans have set themselves to reframing the narrative of the last two weeks. It’s not that conservative House members refused to fund the government unless Obamacare was de facto repealed. It’s that Harry Reid shut down the government by refusing to negotiate.

Welcome to contemporary politics. Something bad happens, and then each party scrambles to describe what happened in a way that makes it seem like the other’s fault. Don’t let the balanced syntax in that sentence fool you, though.

It was conservative Republicans in the house who tied a continuing resolution to a specific and controversial policy demand for the first time in recollected history. They’re the ones who held the government hostage to an agenda they could not accomplish by normal legislative means, and the Senate precipitated a shutdown only by calling their bluff. Now the stalemate continues.