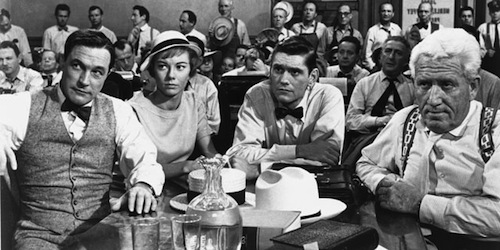 And you say they get the movies over the telephone?

A few weeks ago, my friend got a letter from a law firm in Denton, TX saying that his IP address had been identified as participating in a torrent download of Bareley Legal 6, and he was now being sued in federal court. The firm apparently got his information from his internet service provider, which had provided the list of IPs in response to a subpoena. My friend does not a have a copy of Barely Legal 6 on his hard drive*

and connects to the internet via a shared wireless network, so it seems likely that someone else downloaded the file, if anyone did. The mechanics of proving that he violated Hustler’s copyright seemed impossibly complex, but so did the process of hiring a lawyer and going to federal court to defend himself against charges that he stole pornography. When he asked the law firm that sent him the letter for more information, their response only reiterated the seriousness of the charges and recommended that he settle immediately. And that’s how my friend found out that he was one of over 1,000 “John Doe” defendants named in the suit.

Such mass copyright lawsuits are more common than you think. Two weeks ago, lawyers representing the makers of Uwe Boll’s Far Cry dropped 4,500 defendants from their suit in a Washington, DC district court rather than identify them by name. Judge Rosemary Collyer had asked for more information in order to rule on jurisdiction pertaining to the thousands of defendants who did not live in Washington, DC; the plaintiffs’ decision to drop all but the 140 or so who did suggests that the firm never intended to take them to trial in the first place. As in many such cases, the lawsuit seemed to be a threat designed to coerce a settlement.

That theory is borne out by the size of the firm in the Far Cry case—twelve lawyers at Dunlap, Grubb and Weaver who call themselves the US Copyright Group. These two elements—small firms that couldn’t possibly go to trial in multiple courts across the country and official-sounding names—are signature features of such lawsuits. My friend is being sued by the Copyright Defense Agency, which sounds like a terrifying government organization until you go to their website and see that, among other things, their official seal is actually the coat of arms of the British East India Company. The Copyright Defense Agency turns out to be an LLC owned by Evan Stone, who passed the bar in May of 2010 and is now proprietor of the Law Offices of Evan Stone.

For several years before he discovered his passion for the law, Stone worked in information technology.*

His claim to fame seems to be that he developed an automated system for tracking IPs, issuing subpoenas and emailing internet service customers, allowing him to file lawsuits against thousands of defendants at the touch of a button. As a new attorney with very little trial experience, it seems unlikely that Stone could actually take my friend and his thousand-or-so codefendants to court in their respective states. It seems less likely that he could prove that any one of them actually downloaded Barely Legal 6, and even less likely that he would win the $150,000 he is seeking from each. On the other hand, it seems very likely that the letter he sent to 1,000 strangers threatening to take them to federal court might generate a few of the $2,000 settlements he’s asking for.

There’s a name for this kind of procedure, wherein a person threatens to make an enormous amount of trouble for somebody unless they pay him to go away: racketeering. A number of firms seem to have started up specifically to run this racket, and their letters to defendants make their objectives clear. “”Save money—settle sooner,” reads one letter from XXX Copyrights. “The more effort we expend, including naming you individually in a lawsuit, the more we must recover to make our client whole.” Thus do the courts become a threat more compelling than the law. Stone and attorneys like him are using automated processes to sue internet users by the thousands, in a nationwide shakedown that makes a mockery of both copyright statutes and legal ethics.

This brings us to the ask portion of today’s Combat! blog. My friend has written an open letter to Larry Flynt, owner of Hustler and co-plaintiff in Stone’s lawsuit, asking him to drop the suit and disassociate himself from Stone. Please take a second to read it, and then share it with your friends. It’s going to take us years to reform copyright law and make it into something that works for the digital age. In the meantime, we’ll have people like Stone to contend with. The first play in the game is to tell people that he’s bluffing. It’s a play we can make better together.