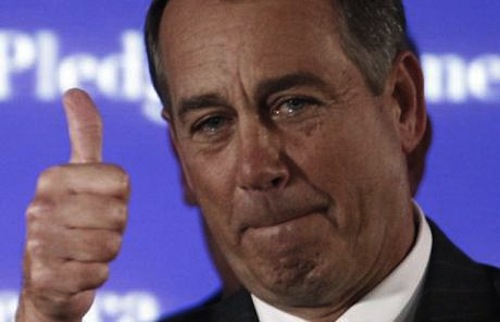 Here’s a fun question: do very ridiculous people feel things as deeply as the rest of us? It seems possible that the same power that enables a Sarah Palin, say, to wink and gosh-darn her way through American politics might limit her self-awareness in other, non-performative situations, too. Can we therefore assume that the lows are as strangely hollow as the highs? Follow-up question: can there be real tragedy in otherwise crass and insipid situations? Like when a Chuck E. Cheese catches on fire? Today’s link roundup looks for the tragically true in the professionally false, while maintaining our standard insistence on the laughable in the probably sad. It’s a paradox stew of contradictory emotions, plus Meghan McCain. Won’t you join me in mocking the tears of a clown?

First, the literal tears of a literal clown. Okay, maybe ascendant Speaker of the House John Boehner is not an actual performing clown, but he does seem to wear a lot of makeup, and he definitely cries. Going-to-just-flip-out-any-day-now New York Times columnist Timothy Egan finds a certain irony in those tears, given that Boehner has spent his political career thwarting the same blue-collar everypersons he gets all misty remembering. Having risen from the lower class to become one of the nation’s most color-corrected legislators, Boehner seems bent on pulling the ladder up after him. “Making sure these kids have a shot at the American Dream like I did is very important,” Boehner told 60 Minutes before choking up, in response to a question about how often he cries. Perhaps he was thinking about how he voted against increasing the minimum wage, against expanding publicly-funded health care for children, and against importing cheap prescription drugs from Canada. Or he genuinely believes he’s a crusader for the little guy. I’ll leave it to you to decide which would be more depressing.

Before we get sad, though, let’s turn our attention to something we can hate with guiltless certainty: a mother of eight children. Mysterious reality TV celebrity I don’t understand Kate Gosselin appeared on Sarah Palin’s Alaska Sunday night, and the Frum Forum helpfully supplied us with a liveblog. You have to read it from the bottom up, since the same technology that let me type “boehner c” and get 250 pictures of John Boehner crying cannot, apparently, reverse the order of a series of time-stamped paragraphs. Anywhom, it turns out Gosselin is kind of a whiner. Either that, or her suburban diva broodmother shtick ran smack up against Palin’s flesh-rending barbarian broodmother shtick, resulting in a battle of who could stay on message long enough to make the other person go home. Winner: Palin. It’s always Palin.

Speaking of people who are totally famous on their own merits and not because of John McCain, Meghan McCain has released this missive defending her choice of Mark Zuckerberg as Time magazine’s Person of the Year. First of all, it looks like the mainstream media is finally expressing some interest in this social networking thing. Second of all, McCain’s columns are getting steadily shorter and more typo-riddled, but they’re still almost always good for a mind-blowing admission. In this one, she outs her fellow members of the Person of the Year Committee, including “myself, Joe Trippi, Google’s Marissa Miller, Wyclef Jean, and the executive director of the American Society for Muslim Advancement Daisy Khan. What an awesome list. One gets the feeling Time told them they were voting for Person of the Year just to get them out of the newsroom for a while so Fareed Zakaria could think.

Meanwhile, in the kind-of-intentionally-ridiculous, the New York Times interviewed Das Racist. For those of you who have not set next to me in a bar during the last ten days, Das Racist is A) a sweet rap group that I am totally into right now and B) probably the kind of people I hate. But they’re also the kind of people I love! Herein lies the ambiguity: two Wesleyan-graduated hipsters who live in Bushwick and appear never to have had jobs, rapping about how consumerism sucks and people assume they’re Puerto Rican because they can’t imagine south asians participating in hip hop or educated multiracial kids existing at all. I’m not selling it very well. How about this?

Deborah Solomon: Do you see your work as a critique of white America?

Himanshu Suri: I think it is solely a critique of John Boehner. As our bandmate Ashok Kondabolu would say, John Boehner represents the utmost in white demonry.

Solomon: This is precisely why I make a point of never asking rappers questions about politics.

Or you could just listen to they raps: