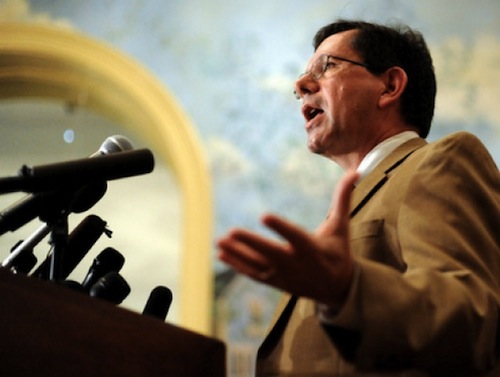 Tea Party Nation leader Judson Phillips, speaking from what appears to be the party room of a Mexican restaurant

emails from founder Judson Phillips. Phillips is not a craftsmanlike writer, but he’s passionate. He’s not afraid to invoke Karl Marx, make broad statements about Muslims, or point out who and sometimes what hates America. But as a just-folks kind of guy, Phillips also lards his statements with the homey, personal touches of an Andy Rooney. Consider his reflection from last Sunday, which begins with this glimpse into his daily life: “When I was in Washington this past Friday, I walked by the United Methodist Building, next to the Russell Office Building.  The sign in front of the United Methodist Building said, ‘Pass the DREAM Act.'” Three hundred words later, he arrives at this conclusion: “For the few remaining patriots in the Methodist church, know what that church supports and then you should abandon the church, much like the Methodist church as abandoned American values and patriotism.” Where he goes in between is pretty exciting, too.

Phillips is more fun when you remember that he used to be a trial lawyer. I don’t know how many people hired him to try to get their apartment deposit back and are in Tennessee state prison at this very moment, but I am prepared to believe any number. Phillips is not a careful arguer. Consider the opening salvo of Sunday’s column, in which he lays the groundwork for his decision to end Methodism:

This is not so much your classic “A –> B –> C ” argument as an “A –> F –> alien letter that has not been invented yet” argument. While one admires the principled objection to Marxism on which the teenage Judson Phillips based his religious decisions, it’s hard to discern precisely how he became aware of John Wesley’s socialist agenda. Hillary Clinton doesn’t count, since she was a teenager at the time, too.*

We’ll have to consider Phillips’s evidence:

The Methodist church is pro-illegal immigration.  They have been in the bag for socialist health care, going as far as sending out emails to their membership “debunking” the myths of Obamacare. Say, where are the liberal complaints on the separation of church and state? I guess their outrage is selective.

I’ll leave it to you to yell at your own computer screen about the separation of church and state. In addition to noting in passing that “most poverty is caused by a lack of freedom and lack of a free enterprise system,” Phillips has gathered all the evidence he needs to call for the destruction of a 250 year-old religion with 70 million congregants: he saw a sign outside one of their buildings.

I do not hate America, sir. I’m a little disappointed to hear that my grandmother has been making apple crisp for a communist subversive organization, but I am thrilled that the Tea Party Nation is captained by a man who could not pass a freshman composition class. It makes me feel like I don’t ever have to actually contend with these people. Of course, should the Tea Party become a dominant force in American politics, their inability to reason and arbitrary declarations of socialism will turn United States government into a blind child’s trip to the hammer factory. But even then, I’m sure they’ll listen to argument.